Agata Kopera, 33, gave birth at a West Cumbrian bus stop just one hour after leaving the hospital. She and her partner, Jacek Lumas, had gone to the West Cumberland Hospital earlier that Thursday afternoon because Agata had been experiencing intermittent contractions Monday, Tuesday and Wednesday. 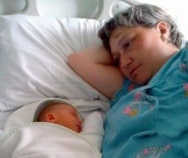 “When we got there, they examined her and said the baby’s head was not far enough down, the baby was not ready and we could go,” said Jacek.

So the couple and their two older children, Remigiusz, 6 and Hubert, 3, headed for the bus stop to go home. “We got the bus from the hospital but Agata was in a great deal of pain and wanted to get off the bus,” Jacek told reporters.

Once the bus was gone, Jacek realized that they were all alone. “I was very panicked. I was very worried!” Jacek stated. He headed over to a nearby house for help and found the door of John McCoy who called for an ambulance.

“A man came to my door in a bit of an agitated state, speaking broken English, saying his wife was having a baby. At first I thought it was a wind-up, then I realized it was genuine,” McCoy said.

By the time the ambulance had arrived, Agata had already delivered the breech baby, pulling it out by the legs with Jacek standing by to catch the baby in his jacket. Once the paramedics arrived, they rushed Agata and the newest addition to the family, 5lb, 12oz Fabian.

Mother and son are reportedly doing well and Fabian’s little brothers are excited for the homecoming of their mother and new baby brother. I am just glad to hear that everyone is okay after hearing about such an alarming birth story!