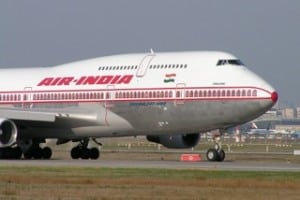 Kuljeet Kaur and her husband, Singh, were traveling to Canada, preparing for their relocation. They were a little apprehensive with the due date of their second child right around the corner (November 7th) but they had received clearance from Kuljeet’s doctor.

Clearance was also the reason that the very pregnant Kuljeet wasn’t questioned by the airline. According to Air India officials, the couple boarded AI flight 187 from Delhi for Toronto and, “the passenger had authorization from her doctor that enabled her to fly” and in view of that, the airline did not raise any objections.

The flight took off from Delhi at 1:35 a.m. and was to have reached Toronto at 6 a.m. local time. When Kaur went into labor just 1:45 minutes into the flight, the pilot announced that he would make an emergency landing at the nearest airport.  Thankfully there was a doctor on the plane who was able to assist with the delivery and keep the trip on schedule.

The first class cabin, with it’s flat beds, became a makeshift delivery room and the team managed ‘a perfect delivery’.

Following the 2 hour delivery the news of the baby’s arrival was met with applause and excitement from fellow passengers.

“The mother and child were in perfect condition and there was no disruption to the flight.”

According to officials, because the baby and her family were in transit to Canada and the parents are currently India passport holders, the baby girl will be entitled to dual citizenship. The family is planning to relocate because the father is an advocate. They had planned to settle in and have the baby after they got to Canada, but apparently, their daughter had other ideas.