With an emergency caesarean section, doctors successfully delivered healthy twins – a boy and a girl – to a brain-dead mother who had been kept alive for 123 days on life support. The 21-year-old mother died following the births. The young woman suffered a stroke when she was just nine weeks pregnant.

These “miracle” babies were possible because doctors used medical interventions and medications to prevent the woman’s body from shutting down, thus allowing the embryos to continue to grow. Staff at the Nosso Senhora do Rocio Hospital in Campo Largo, Brazil took turns singing to the unborn babies and caressing the growing baby bump to simulate a mother’s love. 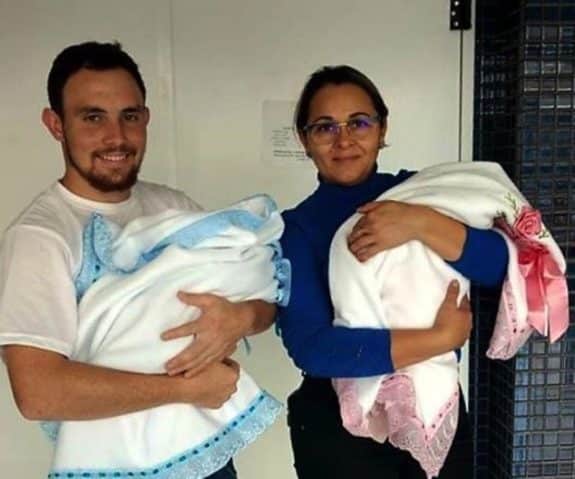 The infant’s dad, Muriel Padilha, is naturally heartbroken over the loss of his wife Frankielen, but overjoyed with the birth of his children, Asaph and Anna Vitoria. The babies were born in February at seven months gestation and finally discharged from the hospital in May. After Frankielen’s ventilator was switched off, her heart and kidneys were donated in hopes of saving the lives of others.

An agricultural farmer, Muriel was on his way to work in October when his wife called, begging him to come home. It was an urgent plea. Frankielen said that her head was “killing her” and she felt near collapse. Rushing home, Muriel found his wife “shaking, crying, dizzy and vomiting.” As he drove to the hospital she warned him to “be prepared to accept this because I won’t be coming home.” Then she passed out and those were the last words she spoke.

Doctors at the hospital diagnosed the young mother – the couple also has a 2-year-old daughter – with a cerebral hemorrhage that had caused severe bleeding in the brain. Over the following three days a battery of tests and scans were conducted before physicians declared Frankielen brain dead and told her husband there was “no hope” for the twins she was carrying. Muriel was told that as soon as the baby’s hearts stopped beating life support would be removed.

But those two tiny hearts continued to beat.

The head of the hospital’s Neurological ICU says that an ultrasound was done and medical staff expected the embryos to be failing, but instead they were clinging to life. Since the mother’s organs were intact and working, they decided to keep her alive and give the babies a chance.

And every day they watched as those embryos continued to grow.

The medical treatment over the next amazing 123 days was complicated, and the twins were checked with an ultrasound every day. Doctors say the success was due to teamwork, but also perhaps due to a divine purpose.

“It was an extremely challenging case which required intensive multidisciplinary work,”Dr Dalton Rivabem, head of Neurological ICU said. “There were many complications with continuous support of medications to maintain pressure, maintain oxygenation, maintain continuous nutrition and hormonal balance. We used antibiotics during the entire hospitalisation period.”

The twins were small weighing 3.08lbs and 2.8lbs, but their health at birth was compatible to that of other premature infants of the same age. They remained in the hospital in incubators for three months to avoid any risk of infection, to build up strength and gain weight, and to wean them off of the medications that were administered to their mother during their gestation.

Many people across Brazil were touched by the story and raised money to help support the family, also donating clothes and other necessities. The twins and their young sister are being looked after by Frankielen’s mother Angela, while Muriel continues to work in order to support his larger family.

Angela says that her daughter “was a warrior until the end, giving life to her children until the day that she died.”