Christie Fletcher wasn’t planning on having a baby, let alone three. Especially since she was on the pill. But that’s exactly what happened to this now mom of four. 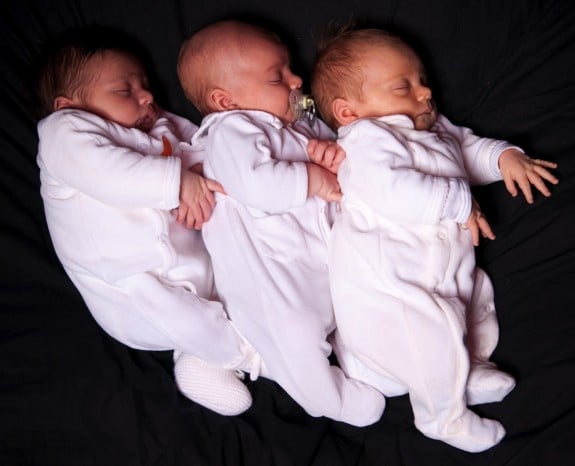 “I was so shocked to find out that I was pregnant again. I had been taking my pill carefully and never in a million years did I expect to end up with triplets,” the 22-yer-old from Wrexhm, North Wales, told Mirror UK. “I had a strange suspicion that something was up when I randomly started feeling very sick. I was at a bonfire party when I didn’t know if I wanted to eat a burger or be sick. My hormones were all over the place and I recognized the feeling from my first pregnancy, but I told myself I couldn’t be pregnant as I had been taking my pill.”

But Christie would soon discover that she was, in fact, pregnant. Now it was time to tell her partner, Carwyn, 27. He wasn’t sure what to think about the unexpected pregnancy, either.

“I was stunned,” she said. “I told Carwyn, he was as shocked and surprised as I was. I had only just had my first born and suddenly we were having another.”

The shock value wouldn’t stop there; the couple would soon learn that they weren’t expecting just one baby, but THREE!

“When I had my bump scanned, I knew something was up,” she said. “The nurses went very quiet and were staring at each other, smiling, but with a look of disbelief on their face. They told me to look at the screen, and I could see three little babies in there. I just said, ‘Oh my God,’ and couldn’t believe it—I thought I was in a dream.”

It wasn’t a dream.

“I now have my hands full with four boys and I don’t plan on having any more,” she said. “I’m not relying on the pill again, though. This time I’m making sure I get the implant.”

Of course, medical science says there could be other reasons that the boys came about, other than just typical birth control pill failure—a rarity, in and of itself, since contraceptive pills have a failure rate of only 0.3%. And it may not even have anything to do with Christie failing to take her pills on time, Dr. Surabhi Nanda, from Liverpool Women’s NHS Foundation and Trust.

“Certain medications, including some antibiotics or anti-epilepsy drugs may reduce the effectiveness of the contraceptive pill and thereby increase the failure rates,” Nanda told Mirror UK, adding that the triplet birth is extremely rare. “As such, the chance of having a naturally conceived triplet pregnancy is approximately 1 in 6,000 to 8,000 births and even rarer for non-identical triplets. It is difficult to say whether the getting pregnant on the pill and conceiving a triplet pregnancy are directly related, as the odds of both the events happening concurrently are indeed very low.”