After working a long shift as an assistant bar manager, Kelly Gadsby awoke early the next morning to severe back pain. The pain continued to get worse so Kelly ended up calling her sister, who then took her to the hospital. Hours later, she delivered a beautiful baby boy. All of that might not seem so odd if it weren’t for the fact that Kelly didn’t know she was pregnant.

“It’s come as just a little bit of a shock, to say the least,” Kelly told Daily Mail UK. “I think the biggest surprise is that I didn’t have a clue I was pregnant. I felt nothing at all, there was no morning sickness and I was just getting along with work and everything else. For a few days, I felt extremely tired, but I put it down to working 40 to 50 hours a week.” 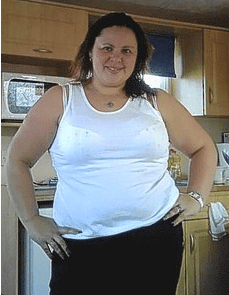 Kelly Gadsby 5 months into her pregnancy

Kelly told Daily Mail UK that had been taking the pill, and that she’d had regular periods. And friends had actually told her that she looked as though she’d lost some weight during the months leading up to the birth of her son. Her partner, Alan Gadsby, has Chron’s disease. Doctors had told him that the medications he was taking would make having a baby “too dangerous.” But, as the couple would learn, having a baby wasn’t impossible.

Maggie Coleman, Good Hope’s maternity clinical services matron and supervisor of midwives says that Kelly’s case is rare, but it does happen.

“I can count on my one hand how many I have seen in my 30-year career here at Good Hope Hospital,” Coleman told Daily Mail UK. “Women who may be a little taller or overweight tend to show much less, whilst menopausal women and younger busy women who are not expecting to be pregnant will simply not be looking for signs. Even a baby’s kicking can be easily mistaken for indigestion.”

In the case of Kelly’s birth, the baby (who the couple named Frankie) sat in a position called occipito-posterior, or OP for short. This means that the baby’s back is right up against the mother’s back. Coleman says that this can result in a “squashy” belly, and “mothers may feel baby kicks in the middle of their abdomen.”

Frankie, born at a healthy 8 pounds, 5 ounces, didn’t make himself known until just before Kelly arrived at the hospital. Kelly said that she had noticed that a “bump” had formed on her stomach. That was when she knew “something wasn’t right.” Nurses then did a pregnancy test after she arrived at the hospital. That test confirmed the pregnancy, just hours before it happened. But the biggest shock may have been for Alan since he wasn’t there to see Kelly in pain.

“My colleagues had to pick me up from the floor,” Alan told Daily Mail UK. “We hadn’t planned the pregnancy at all. I thought it was a wind-up.”

Well, surprise or not, Frankie is a beautiful baby. He joins big brother Joel, 11, from a previous relationship.