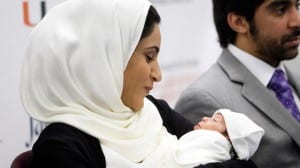 For the first time in the world, a woman who had undergone five major organ transplant surgeries has given birth to a baby girl. Diagnosed with a blood clot in a major vein to the intestine, the woman is today not just alive but also holding a beautiful baby girl in her arms.

Fatema Al Ansari was 19 six years ago when she was diagnosed with a blood clot to a major vein to the intestine, which led organ failure. What was a harder blow was that Fatema was two months pregnant at the time and had to terminate the pregnancy because a condition called mesenteric thrombosis.

In 2007, Fatema received a life-saving organ transplant surgery at Jackson Memorial hospital in Miami, and was given a new stomach, large and small intestine, pancreas, and liver.

She recovered but still wanted to become a mom although she knew that it could be extremely dangerous with the transplanted organs.

‘That she is healthy enough to consider having babies is a miracle by itself,’ he said.

Fatema gave birth to baby girl, Alkadi Alhayal, two weeks ago in Miami. Doctors say that her pregnancy was complicated but she will be able to have more children.

The new mom said at a press conference,

“She is a gift from God and a miracle. It’s the best feeling in the world to be a mother.”

She will remain in Florida for another 2 weeks so that doctors can look after her and the baby. After that she will head home to Qatar with her husband.

Doctors say that this is the first recorded case of a woman with five transplants giving birth to a baby.