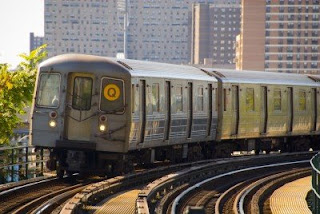 Subway conductor Bretta Sykes can add ‘stand in midwife’ to her resume after she helped deliver a baby on the R Train yesterday.

The baby girl couldn’t wait for her parents to reach the maternity ward, so Sykes stepped in as midwife.

“The baby is coming!” yelled the Brooklyn mother, whose water broke as she and her fiancé headed from their home in Bedford-Stuyvesant to the Queens hospital where the mom had planned to give birth.

“I did not want to cut the umbilical cord. I’m a conductor. I only push buttons,” joked Sykes, a mother of two grown children.

The unexpected delivery happened at the Whitehall station in lower Manhattan, just hours after Sykes’ 29-year-old daughter, Fortune, had told her she was going to have a baby.

“A few hours later, I was delivering one,” Sykes said.

Sykes, a 16-year MTA veteran, was waiting on the platform to begin her W train route when she heard a commotion on an R train that had entered the station and went to investigate.

As soon as she pulled the mom’s jeans down, Sykes knew she wouldn’t have the luxury of waiting for paramedics.

Sykes pulled off her jacket, caught the infant with it and wrapped her in it. “She looked okay to me,” she said of the newborn. “I had tears in my eyes.”

Someone asked what time it was. When a passerby yelled 1:25p.m., the gathered crowd started applauding.