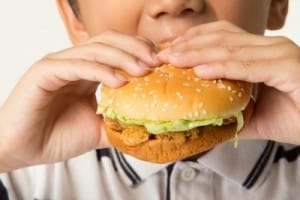 Childhood obesity has moved from being an epidemic to being a pandemic, and many countries are waging war against it. It can be seen in the school lunch program changes in the United States and in Chef Jaime Oliver’s “Feed Me Better” campaign. Now, even the World Health Organization (WHO) is stepping in to do their part.

WHO is now calling for more control on the marketing of unhealthy foods. Outlined in their new report, “Marketing of foods high in fat, salt and sugar to children,” the tightening on food marketing is likely to stir up some commotion, but it may be an absolutely necessary move in the war against obesity.

Studies have found that children who watch more television are more likely to consume unhealthy food, and there are experts who agree and believe that children really are more vulnerable to television commercials than adults. Add, in the fact that unhealthy foods are also marketed to children through social marketing, smart phone and tablet apps, and it’s no wonder why the World Health Organization is calling for more control on the marketing of unhealthy foods.

“Children are surrounded by adverts urging them to consume high-fat, high-sugar, high-salt foods, even when they are in places where they should be protected, such as schools and sports facilities,” Zsuzsanna Jakab, director of the WHO’s regional unit for Europe. He is the very same director who called the current marketing practices “unacceptable.”

At any given time of the day, children can turn the television on and be reached by various food and drink marketing tactics. The most commonly advertised foods include:

What’s more, studies have shown that children with televisions in their room are more likely to suffer from obesity. While there are many other reasons responsible for this, food marketing is also likely a contributing factor to the increased risk.

Yet, despite all of the evidence flowing in, only 6 of the 53 Membered States in the European Region implemented fully regulatory approaches on marketing foods or drinks to children. And in the United States, there is very little regulation; however there are some companies that have voluntarily made some changes to their marketing.

I believe I’ve witnessed, first hand, how marketing can influence a child’s food choices. Even though I’ve never bought it, my children always ask for a super sugary brand name cereal when the commercial comes on. And honestly, the way the commercial is presented, even I’m influenced. It definitely would be nice to not have to go through it, or to have my children continue to ask why I say no (even though I explain it every time) but I also know that it’s not likely to change anytime soon.