Tiny mom Stacey Herald and husband Wil are showing off the newest addition to their family – baby Malachi. 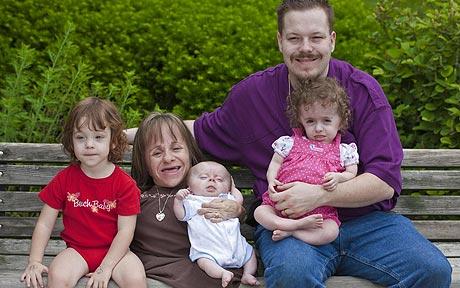 Stacey has a rare genetic condition called Osteogenisis Imperfecta, which stunts her growth and causes underdeveloped lungs and brittle bones.

Years ago, doctors warned Stacey, who is just 2ft 4ins, it would be too dangerous for her to ever have children.

Determined to have a family, the 35-year-old defied docs and has gone to give birth to three babies in the last three years.

Malachi was born by a rare vertical caesarian in November weighing just 2lb 1oz. After his arrival he had to be placed into an incubator in intensive care and was only allowed home last month after falling seriously ill with a virus and then suffered a life-threatening hernia.

Both he and his oldest sister Kateri, 3, have inherited their mom’s condition, while middle child Makya is average sized.

While Wil is at work Stacey watches the 3 kids on her own. A specially built platform allows her to bath them and change their diapers during the day.

The family’s cupboards are organized so she can reach everything she needs to when her husband is not home.

“Three children would be a challenge for anyone – even normal sized people.”

Mrs Herald struggles to cope with daughter Makya, who is already a foot taller than her.

“I can’t physically stop Makya if she’s upset,” said Mrs Herald. “She’s too big for me now, so Wil has to take care of that.”

With all this, Stacey says they are not ruling out a fourth baby. Crazy you say? We agree!