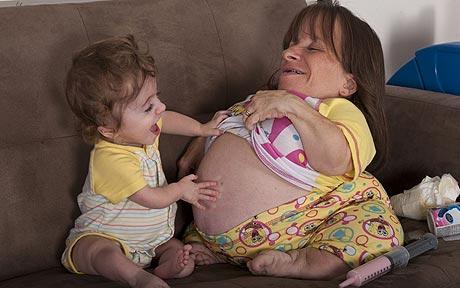 Despite warnings she is risking her life, Stacey Herald, the world’s smallest mother, is set to welcome her third baby.

The 35-year-old from Dry Ridge, Kentucky, USA, suffers from Osteogenesis Imperfecta, which causes brittle bones and underdeveloped lungs, and means she failed to grow.

Now the determined mom, who uses a wheelchair, and her husband Will, who is 5ft 9ins, are awaiting the birth of their third child, due in the next four weeks.

Even thought she cannot hold her daughter because her belly gets in the way, and she admits being pregnant is “uncomfortable”, the couple says they want more children.

By the time the new addition, a boy, is one he will already tower over his mum.

Stacey and her husband met in 2000 while working for a supermarket in their home town and were desperate for a family after marrying in 2004.

But doctors warned them that a baby would grow so large inside her tiny body it would eventually crush her organs.

“It broke my heart that I couldn’t have kids,” she said.

“All my life my parents had told me that I could do anything. Then there were these doctors telling me that we couldn’t be a complete family. It really hurt.”

Eight months after their marriage, the couple was thrilled to discover they were expecting and decided to go ahead even though family and doctors begged them to reconsider.

After 28 weeks, doctors performed a cesarean section and daughter Kateri was born, weighing just 2lbs and 1oz in 2006.

She grew well but there was heartbreak for the family when they discovered Kateri had inherited Mrs Herald’s condition and would also never grow to a normal height.

Doctors tried to let the second baby stay in Mrs Herald’s body for as long as possible, letting her pregnancy go to 34 weeks before taking her into theatre.

Daughter Makaya who, at 18 inches was more than half her mum’s body length when she was born, weighed 4lbs and 7oz.

Now both girls are bigger than their mother, who is now 30 weeks pregnant with her first boy.

She said: “It’s getting tougher and tougher to move.

“At the moment because I’m getting really big again I can’t hold my youngest daughter because my belly gets in the way and I can’t get my arms around her.”

Mrs Herald added: “All my babies are miracles, but we haven’t thought about if we’re going to have some more, as they’re a real handful right now.

“We didn’t plan to have more than two kids, we just think that they’re a great gift to the world, and when I look at them I see Will and I feel so full of love, it’s tough not to want more.”

I hope that after the baby arrives, this couple just enjoys the three miracles they have. It would be foolish for them to keep testing the laws of nature.