When Emilia Grabarczyk was born earlier this year doctors didn’t expect her her to survive. Just 26 weeks gestation, the placenta was failing to provide her with enough nutrition. Without a caesarean, she would have died in the womb. 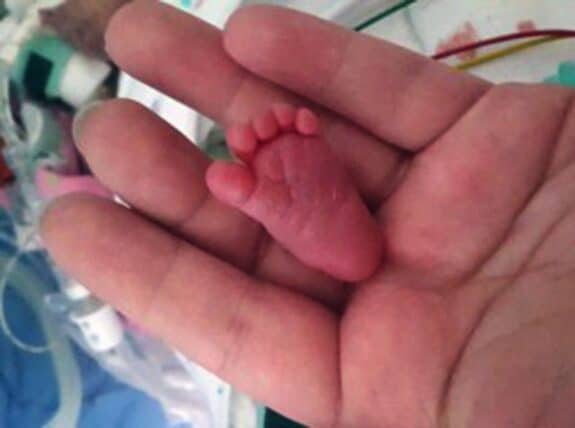 Babies who are born at 26 weeks weigh an average of 21 ounces, but Emilia was much smaller weighing a mere eight ounces. Her foot was just an inch long and her entire body was just 8.6 inches.

Dr Bahman Gharavi, Head of Children and Youth Clinic at St Mary’s hospital, described her birth as truly unique, saying: “Even children with a birth weight of 14 ounces rarely survive. We have to thank Emilia as well for her own survival. She is a little fighter. For more than six months, it was unclear whether she would survive. Only in recent weeks she is getting more robust.”

Emilia’s parents, Lukas and Sabine Grabarczyk, told CEN there was no question they were going to give their child a chance, even if the odds for her survival were low.

Because of her premature birth, Emilia has an increased risk of long-term complications such as cerebral palsy, vision and hearing problems, learning difficulties, and behavioral and psychological issues. So far her parents say she doesn’t show any signs of serious developmental delays, but often they don’t show up until a child starts pre-school.

The last 9 months have been a roller coaster for her parents. When Emilia was just 12 ounces, she underwent abdominal surgery.

“There were many difficult days and many tears, but she clearly wanted to survive,” Sabine told CEN.

Now, the little fighter tips the scales at 7lb 2oz and is getting stronger with each passing day.

Her amazing survival is also one for the record books! She is believed to be the smallest baby to ever survive premature birth. The previous record is held by Rumaisa Rahman, who was born at 26 weeks at the Loyola University Medical Centre in Chicago weighing 8.6oz.

Earlier this year E’Layah Faith Pegues made news when she was released from hospital less than 5 months after arriving at 26 weeks weighing 10 ounces.