It has long been believed that genetic factors influence the birth weight of a child, however,  a new study that involved newborns in eight geographically diverse areas like India, China, Brazil, Italy, Kenya, Oman, the United States and Britain has revealed that babies, the world over, are the same size at birth when born to a well educated, healthy mom. 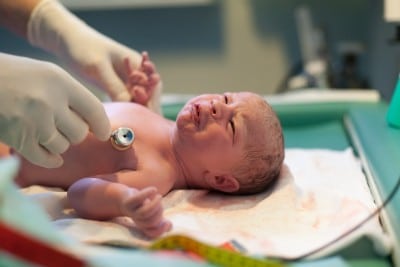 ‘Currently we are not all equal at birth. But we can be,’ said the lead author professor Jose Villar from University of Oxford in Britain. ‘We can create a similar start for all by making sure mothers are well educated and nourished, by treating infection and by providing adequate antenatal care,’ he added. ‘Do not say that women in some parts of the world have small children because they are predestined to do so. It is simply not true.’

For their study the team carried out ultrasound scans from early pregnancy to delivery to measure babies’ bone growth in the womb.  To ensure the research was uniform they used the identical methods in all countries and the same ultrasound machines.

The baby’s length and head circumference at birth was also tracked as well. After analyzing the information from almost 60,000 pregnancies it was found that if mothers’ educational, health and nutritional status and care during pregnancy are equally good, babies will have equal chances of healthy growth in the womb and future good health.

The problem is that maternal care and information around the world varies greatly from country, or even, city or town. It was noted that at least 60% of the 4 million neonatal deaths that occur worldwide every year are associated with low birth weight (LBW), caused by intrauterine growth restriction (IUGR), preterm delivery, and genetic/chromosomal abnormalities, demonstrating that under nutrition is already a leading health problem at birth.

Currently, the World Health Organziation’s recommendations are based on a population of births from California, USA, in the 1970s and are unlikely to be a suitable international reference more than 40 years later.

Researchers, are looking to create an International Fetal and Newborn Growth Standards that can be used in all countries to be ‘a common reference with uniform application that allows international comparisons without losing the usefulness for local application.’