Home » Would You Buy Your Child A Doll That Sounds Like It’s Swearing? 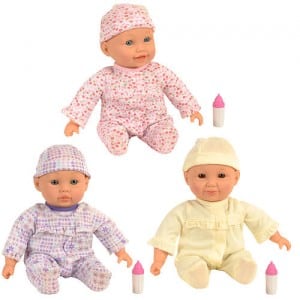 This weekend a doll or actually a trio of dolls caused a bit of a stir after they  appeared to be swearing when there were played with.

The “You & Me Interactive Play & Giggle Triplet Dolls”, which are intended for children 2 and up, are currently being sold exclusively at Toys “R” Us stores.

Parents started to complain after some noticed that it sounded like the toys were saying “You, crazy b***h” when they were activated.

A Toys “R” spokeswoman told FOX23 that the retail store has not received widespread complaints and said the offending phrase is just baby talk and that they have no intention of pulling the dolls from the shelves.

The question is: whether they pull them or not, would you buy a doll that ‘could’ be using a phrase that is a offensive?  Heck, if the dolls are intended to ‘interact’ you could run the risk of having 3 saying it at the same time.

You can hear the doll in action on this video. What do you think? Is it swearing?