As much as we may try by appearances, there is a harsh reality: we all do it, at least to some extent. Aesthetics can sometimes determine whether or not we feel a person is honest, strong, or competent (as well as the opposite of all those traits). But it seems that adults aren’t the only ones who use facial features and appearance to determine what a person is like; even very young children seem to have predetermined notions about a person, based on what they look like.

A new study published in Psychological Science showed pairs of faces to 99 adults and 141 children between the ages of 3 and 10. All of the faces were digitally created using what science already knows about how faces are perceived (e.g. people with more feminine and child-like features are perceived as more trustworthy than those with thick necks, heavy brows or jutting jaws). Additionally, the researchers intentionally made all the images male, to avoid gender bias, and bald, to ensure that hair did not sway a subject’s decision. 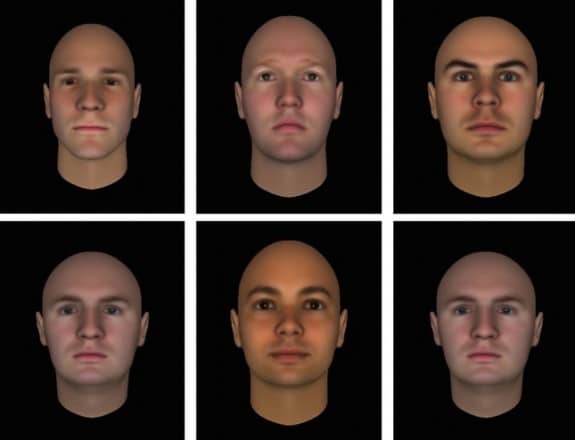 Each subject was asked to choose one of two faces that looked more trustworthy, dominant or competent (for children, the adjectives were mean/nice, strong/not strong, smart/not smart). Once researchers tallied the results, the answers given by adults and the answers given by children were compared.

Overall, adults seemed to agree which of the two faces was the most trustworthy, dominant or competent (consensus ranging from 80 to 95 percent for each pair of faces). According to the researchers, this was rather expected. What was not expected was that children had pretty consistent results among each other and, even more surprising, predeterminations that closely matched those of the adults.

“We were dumbstruck when we found very young children have these preferences by age three,” psychology professor Mahzarin Banaji of Harvard, told National Geographic. “We would not have expected to see that data showing [preferences] are present in near-adultlike forms pretty early.”

In fact, the results are almost eerily close, with children making the same decisions as adults about faces 65 (strong vs. not strong) to 97 (mean vs. nice) percent of the time.

“It’s hard to know exactly where this is coming from,” Emily Cogsdill, a psychology graduate student from Harvard, told National Geographic. She says it’s possible that television characters for kids’ shows, where cute and nice are closely linked, play a role. “But we don’t have a fully clear answer.”

The authors say that more research is needed to figure out what the origins are of facial bias – not just in children, but in adults as well. Primates may even be able to offer some answers by telling us if they, too, make judgments based on facial appearance.

“You look at a bunch of monkey faces on the web and you might think, ‘That’s one mean monkey,’” Bamaji said.

Of course, you can’t truly help what you look like any more than the next person. So what if you happen to have one of those “faces” that seems less trustworthy, or angry, or aggressive? Cogsdill says that, while there’s no data on it, smiling more often could help.

You really can’t judge a book by its cover, nor a person by their appearance. This is as much of a safety issue as it is a social one. Cogsdill suggests that parents “start a conversation with their children about making judgments based on appearances,” and maybe even look into sharing books in which the ugly duckling actually turns out to be the hero.