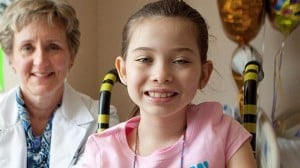 Rabies infection is rare in humans but when it does infect, not many live to tell the tale of their survival. That is why when eight year old Precious Reynolds was first diagnosed with rabies, few thought she would recover. But the young girl showed her grittier side by winning the battle against the deadly infection and becoming one of the three people in US and only person in California to have survived.

Rabies is a virus that attacks the nervous system. It first breaks down basic body functions like breathing, swallowing etc. and finally attacks the brain. It is common in animals and seen rarely in humans when they are bitten or scratched by an infected animal. Worldwide there are 500,000 rabies cases recorded annually but in the US because of strict animal vaccines and the anti-rabies infection given just after an animal bite, the cases are rare.

In the case of Precious no one knew for sure how she became infected because she did not complain of any animal bites. Doctors suggest she might have been infected when she was playing with a feral cat a few weeks before her illness.

Precious initially showed flu like symptoms and then she gradually started becoming very weak. When hospitalized at UC Davis Children’s Hospital she was initially diagnosed with encephalitis an inflammation of the brain, usually caused by a viral infection. She was on a ventilator.

It was only after Dr. Carol Glaser the head of the state’s encephalitis project, insisted, the tests for rabies was done and came positive.

“The next afternoon, she called me and said, ‘You’d better sit down,’ ” said Dr. Jean Wiedeman, an associate professor of infectious diseases at UC Davis who headed Precious’ team of doctors.

For the hospital the challenge was immense because till that time only one of the doctors had come across a rabies case Dr. Jennifer Plant, assistant clinical professor of pediatrics at UC Davis. In 2006 she was one of the first doctors to see a boy in Children’s Hospita,l Oakland diagnosed of rabies who sadly could not survive.

“I think by default, I was the rabies ‘expert,’ having seen it once before,” Plant said. Although she knew a treatment existed that had worked with two other rabies patients in the United States, the diagnosis, she said, “still carries a very grave prognosis. It’s not something you look forward to sharing with the family.”

The two earlier cases were of a Wisconsin girl in 2004 and a Texas girl in 2009. In the case of the Wisconsin girl the doctors had tried a treatment which is now known as the Milwaukee protocol and thought. The treatment involved putting the patient in a drugged coma so that the normal bodily functions slowed down and the body had a chance to fight off the infection itself.

It was the only treatment that was possible in Precious’s case too because rabies cannot be treated with medication.

“The idea of the coma is to keep everything sort of settled down and calm while her body fights off the virus,” Plant said. “Essentially, we’re putting her brain to sleep to protect it during this time.”

Precious had her grandmother Shirlee Roby to give her strength.

“I’d tell her that she had a big bad bug inside her, and she had to fight this big bad bug. I told her she had to put him on the mat and put him in a half-nelson and pin him,” Roby said. “And by golly if she didn’t do it.”

Precious was in a medically induced coma for more than a week while her body did exactly what her grandmother had instructed. Slowly, she came out of her coma and was out of the intensive care within three weeks.

But the infection is so deadly that it might already have damaged some of her nervous system. Precious is therefore receiving intensive rehabilitation. She has already started walking with the help of a walker, talking and writing a bit after the ordeal. Her grandmother is hopeful that she will be released from the hospital by June 22.

Although Precious’s recovery is a wonderful news, doctors are still not sure if they have found a definitive cure for rabies through the comatose treatment she went through. This is because the disease is difficult to diagnose and doctors also believe Precious might have had a strong immune system that fought the infection. She could also have been infected by a virus that was not that lethal.

“These cases are giving us a better understanding of the spectrum of rabies. Survival from rabies is likely dependent upon both host, meaning the patient, and virus factors,” said Dr. Roy-Burman a pediatric intensive care physician at Children’s Hospital Oakland who treated the 2006 case.

Still, he added, “It’s very exciting to see survivors from this disease. We’re at least letting people know that it’s not necessarily futile” to treat rabies.

Precious does not realise yet how lucky she is. She is right now looking forward to go back home where she lives with her two sisters, a brother a cousin and her grandparents. She is most eager to meet Copper, the family dog.

In a feeble voice she whispers,