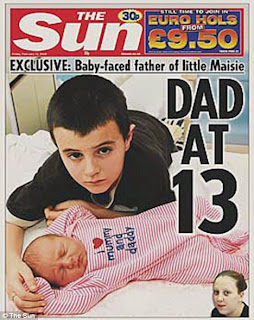 The 13-year-old boy that made news this week after he fathered a baby has requested that a paternity test be done to ensure he is the father of 5 day old Maisie.

The story has taken a twist after it was claimed Richard Goodsell, 16, and Tyler Barker, 14, may have fathered the child.

The two boys have come forward and said that they were also with Chantelle Steadman around the time she conceived Maisie.

After hearing this, Alfie Patten’s father has advised him to get the test in order to ‘to settle this once and for all.’

He is still not sure that ‘a boy of his age was capable of conceiving.’

Yesterday Alfie, who is at the centre of a furious battle for interviews with five-figure sums reportedly being paid, arrived home at his mother’s £395,000 home after spending the night at Chantelle’s parents’ house.

Once indoors he gave a series of clipped answers to a long list of questions by an eager reporter from The People.

This is all very sad. Children this young should not be raising a baby. This kid is still in public school.