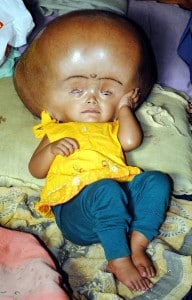 Earlier this year, Roona Begum, an infant from India pulled on the heartstrings of people all over the world when photos, taken by AFP, hit the Internet. Born with hydrocephalus, a condition that causes cerebrospinal fluid to build up on the brain, her head had swollen to a circumference of 37 inches. The little girl couldn’t move her head, let alone crawl or sit up. But there was a much bigger threat than not being able to move…

Roona’s parents couldn’t afford the medical care to treat the little girl, and they feared for her life. Their fears weren’t irrational; untreated, hydrocephalus causes pressure on the brain, which can cause vision and neurological impairment. Eventually, if left untreated long enough, it can lead to death.

Thankfully, pictures of Roona’s condition reached the right people; an outpouring of prospective donors contacted AFP, asking how they could set up a contribution fund to help the little girl. Then, Fortis Memorial Research Institute stepped in, offering to treat Roona for free.

The private Fortis hospital in Gurgaon brought Roona and her parents to the outskirts of New Delhi, where the treatments would take place. The little girl endured several surgeries to shrink the size of her head by 36 centimeters. She did extremely well, and has shown enough improvement that doctors have decided that she can now return home.

But she did more than just pull through; she’s shown so much improvement that doctors have decided that she can return home.

Roona’s return home doesn’t mean she’s finished with the surgeries, however; there’s still more to be done. Doctors are planning on bringing her back in about six months to hopefully shrink her head a little more, bringing it more proportionate to her body size. They are hoping that it will help her make even more progress. 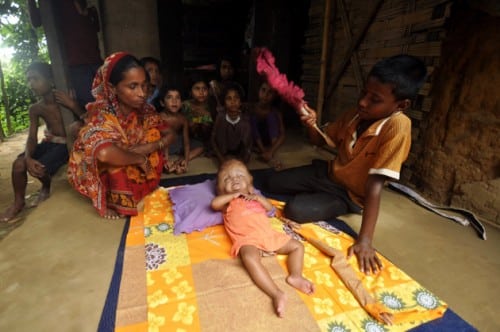 “The next big step will be for her to sit up,” Vaishya said.

But for now, Roona’s parents are simply happy to have her home, and to see her improving.

“She is so strong, she has gone through so many surgeries and she is still here and she’s in good spirits,” Roona’s father, Abdul Rahman, told NY Daily News.