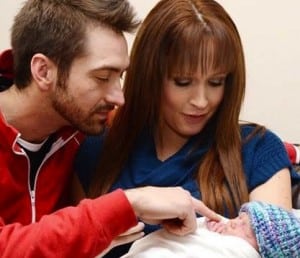 On New Year’s Day, at 12:46 a.m., Grace Olivia Ketcheson was the first baby born in 2012 at Medicine Hat Regional Hospital. Grace’s brother, Jack, was also the first infant born in Regina, 365 days and four hours before her.

So who’s the mother that defied all odds and delivered New Year’s babies, one year right after the other? Her name is Bobbi Jo Ketcheson. With the addition of Grace, she is a mother to four children, all under the age of four and all conceived, despite the use of birth control. “We’re like the two most fertile people in Canada,” Bobbi Jo laughed. Sound crazy? Keep reading. It gets better.

Bobbi Jo also suffers from a condition known as hyperemesis gravidarum, a condition that causes extreme, persistent vomiting during pregnancy. This condition is the only indicator she has to gauge her deliveries, which are also extremely short.

So, because of Bobbi Jo’s condition and short labors, she and her husband, Kurtis Ketheson, took every precaution possible to make sure they were ready when Grace was. They made dry runs to the hospital to determine the fastest route. They set a bed up in their heated garage, just in case Bobbi Jo couldn’t make the hospital on time.

“My dad was with me [on New Year’s Eve],” Bobbi Jo stated. “I had just changed the laundry over and hadn’t even been sitting on the couch for five minutes. I gagged once, ran to the kitchen sink, threw up and looked at my dad, ‘Oh no, call 9-1-1, I have to push.’”

While Bobbi Jo’s dad was calling the ambulance, Kurtis was returning to Medicine Hat from work. He was just approaching the edge of the city when he got the call.

“Her dad called me to tell me that the ambulance had just left the house,” he stated. And sure enough, just as he was heading towards the hospital, he saw lights behind him. “I knew it was them,” he stated.

So Kurtis was able to make it to the delivery, which didn’t go quite as fast as everyone thought it would. Little Grace’s chin was stuck on Bobbi Jo’s pelvic bone, and she would have to be born through an emergency C-section…or so they thought.

“I just said screw it, I don’t have time for a C-section,” Bobbi Jo stated. “Somebody lift up the blanket and catch. She was born right there on the operating table.”

The couple did state that they won’t be trying for next year’s New Year’s baby. In fact, they say that they are definitely finished having children.