The U.S. Consumer Product Safety Commission (CPSC) is warning consumers that “SafetyCraft” brand full-size and portable drop-side cribs manufactured or distributed by Generation 2 Worldwide of Dothan, Alabama, contain drop-side hardware that appears to be identical to Generation 2 Worldwide ChildESIGNS brand drop-side cribs recalled in February 2010. This hardware found on SafetyCraft drop-side cribs can fail and place infants and toddlers at risk of strangulation and suffocation. CPSC staff urges parents and caregivers to stop using these cribs immediately and find an alternative, safe sleeping environment for their baby. They are warning parents to not attempt to fix these cribs. 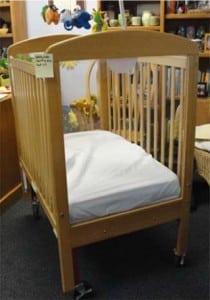 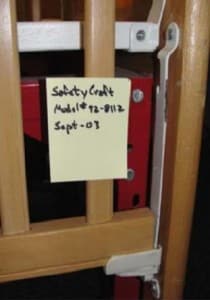 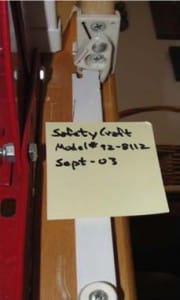 Because Generation 2 Worldwide ceased operations, CPSC has limited information about these cribs and where they were sold. CPSC has been unable to identify major retailers that sold these cribs. The name “SafetyCraft” appears on a label affixed to the crib’s headboard or footboard. Product labels may identify the place of manufacture as Indonesia or Dothan, Alabama. This warning involves all SafetyCraft drop-side cribs, including model 92-8112, manufactured and/or sold by Generation 2Worldwide. Some of the cribs have a clear plastic headboard and footboard. These cribs are in use in childcare facilities as well as homes.

The crib’s plastic drop-side hardware can break, which can cause the drop-side of the crib to detach from a corner of the crib. When the drop-side detaches, it creates a space into which an infant or toddler can roll and become wedged or entrapped. When a child is entrapped between the drop-side and the crib mattress, it creates a risk of suffocation or strangulation. In addition, the crib’s mattress support can detach from the crib frame, creating a hazardous space in which an infant or toddler can become entrapped and suffocate or strangle.