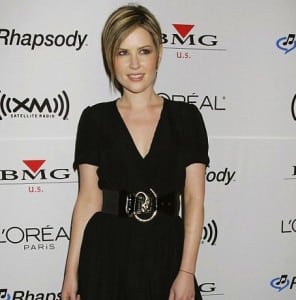 Congratulations are in order for singer Dido and husband Rohan Gavin!

The Daily Mail reports that the couple quietly welcomed baby Stanley in July at the Portland Hospital in central London.

The couple are believed to have married quietly last year and now live in North London.

Dido announced her pregnancy last year when she had to cancel an appearance at the Oscars.

Hello everyone, It’s been a month of amazing news for me and now I have some more to share.

‘Me and my husband Rohan are expecting a baby and we’re beyond happy and excited about it.

‘So as some of you already know, I won’t be able to travel to LA for the Oscars ceremony to perform If I Rise.

‘Obviously I’m really gutted about not being there – going to the Oscars has literally been a dream of mine since I was about nine.’

Pregnancy, she said, changed her priorities,

‘There’s a real calmness about it which I think is really nice. Your decisions are sort of made for you. You just have this priority that is unchangeable and I think that’s a great calmness that comes from that.’

Yesterday the new mom had many things to celebrate. On top of it being Christmas day, it was a first one for her son and her birthday!