The new Disney Wish Cruise ship is scheduled to sail its maiden voyage on June 9, 2022.  The first new ship for Disney Cruise Line in 10 years, the Wish will debut with many new experiences and spaces for families of all ages.

With the addition of Star Wars: Cargo Bay, Mickey and Minnie Captain’s Deck, and The Hideaway, Disney Cruise Line completes an unrivaled roster of new and reimagined experiences for children of all ages coming to the Disney Wish in summer 2022. More than just highly themed spaces, these kids’ clubs will transform into living worlds through magical entertainment presented with the care and expertise of Disney-trained counselors.

“With even more spaces, stories and characters than ever before, the stage is set for a line-up of truly remarkable new experiences for children aboard the Disney Wish,” said Jim Urry, vice president, entertainment and port adventures, Disney Cruise Line. “We’re combining renowned Disney entertainment, expertly developed programming and imaginative storytelling to put kids in the center of their own adventures right alongside some of Disney’s most beloved characters, like Mickey Mouse, Chewbacca, Black Panther, Rapunzel, Belle, Anna, and Elsa, and more.”

For kids cruising on DCL, the Oceaneer Club is the fun hub of the ship.  No other cruise line creates kid’s experiences like Disney.

On the Disney Wish, children ages 3 to 12 will step into their favorite Disney worlds at the Oceaneer Club, a real-life wonderland featuring more stories than ever before. Previously Disney had announced the Marvel Super Hero Academy, a high-tech facility for training the next generation of heroes; Fairytale Hall, a royal trio of activity rooms inspired by Rapunzel, Belle and “Frozen” friends; and Walt Disney Imagineering Lab, a unique opportunity for kids to discover the secrets of world-renowned Disney Imagineers. Rounding out Disney’s Oceaneer Club are two brand-new spaces – Star Wars: Cargo Bay and Mickey and Minnie Captain’s Deck. 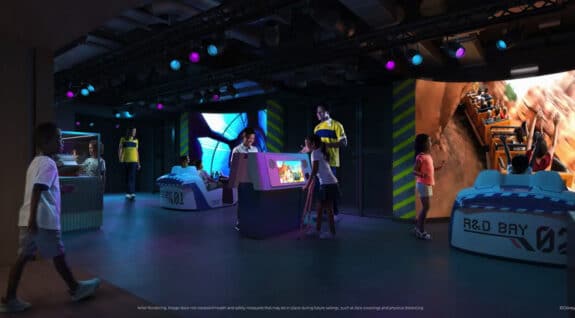 The peculiar creatures and legendary characters of the Star Wars galaxy will take center stage at Star Wars: Cargo Bay. This first-of-its-kind immersive experience will place kids in the important role of creature handlers as they learn to manage a mischievous menagerie of exotic beings from across the galaxy, including a porg, Loth-cat, worrt and more. Throughout the cruise, they’ll use augmented reality-enabled datapads to track and study the creatures on a series of special assignments. But there’s more to this job than meets the dianoga eye: The new crew will actually be joining an important mission to deliver a pair of secret stowaways, Rey and Chewbacca, back to the Resistance.

During the interactive “Star Wars: Creature Challenge” experience, the newly minted caretakers will be put to the test as they help feed the lifelike creatures and encounter some of the most dangerous beings in the galaxy. When things go awry, they’ll need to call on the expertise of Rey and Chewbacca — and even channel the Force — to secure the ship from destruction.

A Celebration of Exploration at Mickey and Minnie Captain’s Deck

Specially designed for the youngest sailors at Disney’s Oceaneer Club, Mickey and Minnie Captain’s Deck is a nautical playground inspired by the colors, icons and magic of Disney Cruise Line. This brand-new space will be filled with an array of maritime-themed physical and sensory-style games and activities, such as pipe slides and crawl-throughs, ship’s wheels, “busy boxes” fashioned as ship controls and cushy life preserver seating areas.

When little cadets enter the space, they’ll set sail on a fun-filled adventure and enjoy quality play time with Mickey Mouse and Minnie Mouse themselves. At select times throughout the voyage, the space will be open to little ones’ families for group play, and the toddlers from It’s a Small World Nursery will also get dedicated access to the club to explore, learn and play with Mickey and Minnie.

The signature experience will be “Minnie’s Captain Academy,” a high-energy training session for kids to exercise their bodies (through playful games, dancing and maritime “drills”) and their minds, testing their imagination and ingenuity during a series of challenges tied to STEAM principles (science, technology, engineering, arts and mathematics). Captain Minnie will inspect their progress and officially declare them honorary captains!

Older kids will chill and play in their own way aboard the Disney Wish at trendy hangouts that combine sophisticated design with youthful Disney touches. At Edge, tweens ages 11 to 14 will have fun, make friends and play games in a bright, colorful hangout inspired by a chic New York City loft. Teens ages 14 to 17 will have their own dedicated club at Vibe, a stylish space inspired by a Parisian artists’ loft with classic architectural elements, vibrant neon signs, and funky pop art. 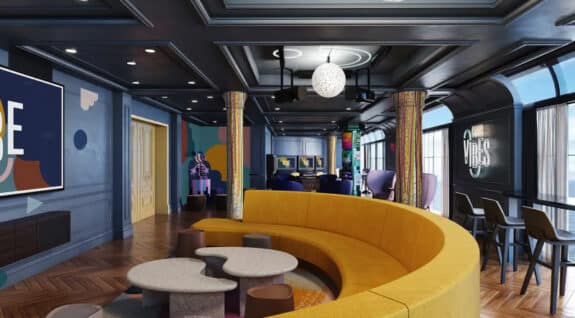 For the first time on a Disney ship, the Disney Wish will feature a third club for tweens and teens: The Hideaway. This hip new hangout will offer older kids and young adults a chill place to relax, listen to music, and more in a posh setting complete with a dance floor and DJ booth – perfect for karaoke contests and dance competitions. The Hideaway will be adorned in a vibrant color palette, retro-inspired design details, a stylized “Hiya, pal” mural, and disco ball lights. Adjacent to Vibe, this flexible venue can be opened to the teen club, closed off for tween activities, and even reserved especially for guests ages 18 to 20. 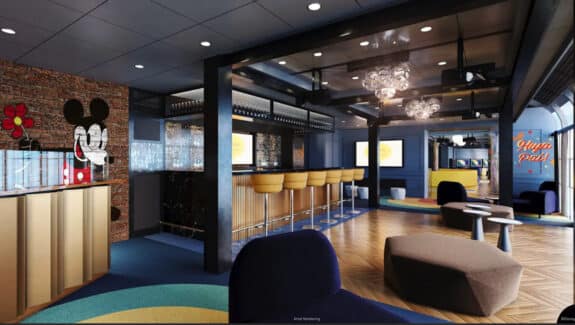 All three spaces will be bursting with creative design details, comfortable lounge space, high-tech entertainment and a jam-packed schedule of can’t-miss activities. 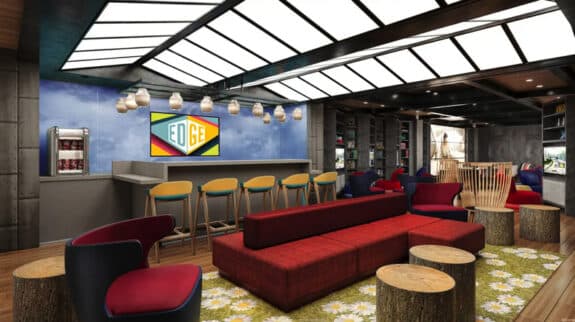