Home » Doctors Save the Baby of Couple Killed in Car Crash 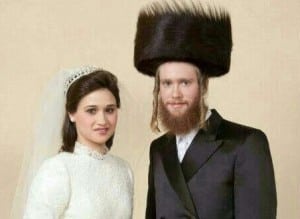 UPDATE: It breaks my heart to report that the baby that was born after this horrible accident has passed away.

Original story: It had seemed that Nachman and Raizy Glauber had a beautiful life ahead of them. They’d been paired by a matchmaker a little over a year ago. Shortly after, they were married. Then the newlywed couple became pregnant with their first child. That promising future came to a tragic and abrupt end after the couple took off to a hospital in New York.

Nachman, recently made a big brother after his parents had just given birth to another little boy, came from a prominent family that founded the G&C clothing chain, a major supplier of suits and garments for the Orthodox community. Raizy worked at a hardware distribution store.

A woman who lives just two blocks from the accident said she’d seen them out walking nearly every day. “They were a special couple,” the young woman who lives near Raizy’s parents told NY Times.

Indeed they were. Part of a tight-knit Orthodox Jewish community. They were proud to-be parents eagerly anticipating the birth of their first child.

“They were always glowing,” family member, Sarah Gluck, told NY Times. According to Gluck, the couple was looking forward to starting their family.

But on the night of the crash, Raizy, who was 24 weeks pregnant, had told a family member that she couldn’t feel the baby. The couple was rushed to the doctor by a livery cab, a black 2008 Toyota Camry. On Wilson Street, the cab was struck on the driver’s side by a 2010 BMW. The passenger and driver of the BMW fled the scene, but Raizy and Nachman weren’t lucky enough to walk away.

Yisroel Altman, a salesman who lives in South Willimasburg, was one of the first people to arrive at the scene of the accident. He told NY Times that he had watched emergency responders use metal cutters to pull an unconscious Nachman out of the back of the smashed Toyota. Responders had performed CPR, but a spokeswoman for the Beth Israel Medical Center in Manhattan, the hospital Nathan was taken to, told NY Times that he had been pronounced dead on arrival.

Raizy, who had been sitting behind the driver, had been thrown from the vehicle, Altman said. She was found underneath a tractor-trailer parked on the west side of the street. She had been taken a few blocks further to Bellevue Hospital Center, a major trauma center that is skilled at tackling some of the most severe emergencies. It was here that the baby was delivered. Though Altman says that paramedics had told him that Raizy was speaking when they first placed her into the ambulance, she didn’t survive the crash either.

Family and friends and rushed to visit the newborn baby, who, according to a family member, was intubated and in critical condition. His birthday falls on the anniversary of his parent’s death. It is a bittersweet birth for the family of Nachman and Raizy.

“We were sitting just last night together, and now they are gone,” Nuchemyoel Silberstein, Raizy’s brother told NY Times. He had shared a dinner with his parents and the expectant couple on Saturday night, the night before the couple had died. “How can she be gone?”

But even through the tragedy, loss and pain, the couple’s family is holding on to their hope and faith.

“It’s very hard for me,” Raizy’s father, Yitzchok Silberstein, told mourners at the couple’s funeral. “But I have to say that whatever God does is right, even if I don’t understand it, He has a plan.”

Though no one has made mention of what will happen to the baby, should he survive, it is clear that he will be well loved.

“Everybody wants the baby,” Gluck had said. “It’s going to have a lot of love.”

Isaac Abraham, a community leader in Williamsburg and friend of Raizy’s parents, told NY Times that the community will do everything they can to support the family of the orphaned child, who, according to family members, will be named after his father.

“Most of the resources are going to the child to make sure he gets all the medical attention he needs,” Mr. Abraham told NY Times.