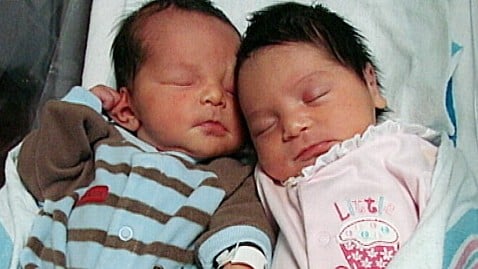 “I was shocked to learn I had a baby in each uterus,” said Mrs. Barbosa, who has a two-year-old daughter at home. “But my husband and I are just so happy that they are here and healthy.”

Barbosa has a rare condition called uterus didelphys, or double uterus, which affects about one in 2,000 women worldwide. Although this rare condition can cause infertility, miscarriage, or premature birth for many women, Andreea delivered her healthy baby boy and girl at 36 weeks by cesarean section. Baby Nathan arrived first weighing in at 5 lbs, 8 oz. Two minutes later, his sister Natalie was born, weighing 5 lbs, 10 oz.

There have only been about 100 known cases worldwide of women with uterus didelphys being pregnant in both uteruses at the same time. Because the condition is so rare, various statistics on the incidents of the unusual pregnancies have been documented. The most recent involved a woman in India who delivered twins in separate uteruses on July 29.

Andreea’s doctor, Patricia St. John, MD, OB/GYN at Morton Plant Hospital, said that her patient knew the risks that were involved with her pregnancy.

“We were thrilled to work with the family and guide them through this unique pregnancy and delivery,” said Dr. St. John. “Because we were aware of her condition, we were able to take special precautions to ensure that both mother and babies would be healthy.”