Heavily pregnant supermodel Heidi Klum showed off her growing baby bump in all its glory yesterday as she enjoyed a family day in the park.

The Victoria’s Secret model proudly flaunted her figure in a tight black vest and slinky full length skirt for an afternoon of sunshine and ball games in Beverly Hills. 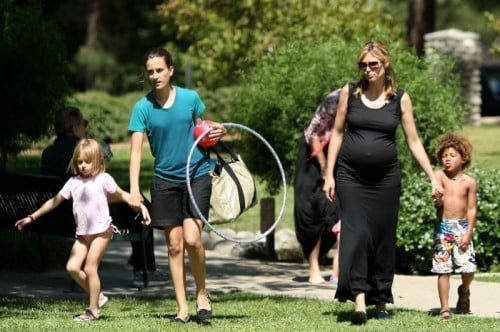 The 36-year-old, who is expecting a girl with husband Seal, says she is embracing her changing physique.

‘I tend to be rounder with girls. The love handles are peaking in the back!’ she says.

‘You get used to all the changes of your body. It’s not like I’m going, “Oh my God!’ I’m used to that part of it. You feel like a Buddha!” she added.

Heidi, who already has three children, Leni, five, Henry, three, and two-year-old Johan, looked radiant as she strolled around barefoot and she says she has never felt happier.

‘My mood is the same this time as with all the other pregnancies,’ she told In Touch magazine. ‘I always feel great! I never really change.’

Heidi says she isn’t worried back getting back in shape following the birth.

After all, she managed to star in a catwalk show for Victoria’s Secret a mere two months after giving birth to Henry.

She concludes: ‘I know my body will go back again.’