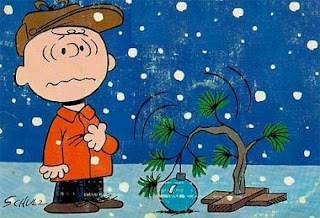 This is the first year that my son ‘gets’ Christmas. He understands who Santa is, knows the whole drill about Christmas eve and is even starting to understand some of the characters associated with the season – Frosty, Rudolph, the Grinch…

So…in keeping with this tradition, I thought it would be fun to tape Charlie Brown’s Christmas for the three of us to enjoy together.

It wasn’t until we all sat down to watch the movie that I realized all of the bad messages through out the whole thing. These kids are angry and a lot of time – mean!

Lucy needs to have her butt kicked and to be thrown out of the neighborhood. Her repeated use of the word stupid, belligerent comments and physical abuse was a bit of a surprise to me.

When she doesn’t get her own way she screams at the other kids and even resorts to punching them in the face when that doesn’t work.

I know I sound uptight, but this goes against everything that we are trying to teach our guy – especially at Christmas.

It is also hard to not notice how mean everyone else is to Charlie Brown. They all take turns making fun of him and then all laugh in unison as he pouts and walks away. Is this behavior that you would like your kids to model? Probably not?

I know that this movie was written in the 60’s when the world was in a different place, but that doesn’t discount the fact that kids should be nice to each other regardless of time or era.

We have had a huge bully issue in schools for years… Positive role models could go a long way.

The silver lining to this cloud, is that many of the stories are wrapped up with a positive outcome, which is nice, even though it doesn’t erase that what happens in the middle is less than heart-warming…

Snoopy was also a hit with us because of his ability to stay festive while the rest of the gang struggles to keep up.