Lisa Marie Presley shows off her 3-month-old twin girls in this week’s edition of People Magazine.

The mom of 4 talks to the magazine about her pregnancy, motherhood and how she struggled to get pregnant. 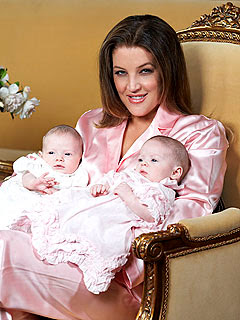 “I really wanted these babies,” said Lisa, 40, who tried for two years to get pregnant before conceiving the twins. “My blood was too thick and would clot, which caused several miscarriages,” she tells People. “The moment I took blood thinners, I got pregnant.”

Lisa and her guitarist husband Michael Lockwood, 47, also share their L.A. home with her children from a previous marriage: daughter Riley, 19, and son Benjamin, 16.

Life as a bustling family of six is “chaotic bliss,” says Presley.