Home » Matt Damon Trick or Treats With His Girls!

Halloween came early for the Damon family!  Actor Matt Damon and his wife Luciana were spotted on Sunday out trick-or-treating with their daughters Isabella and Gia in the West Village, New York City. 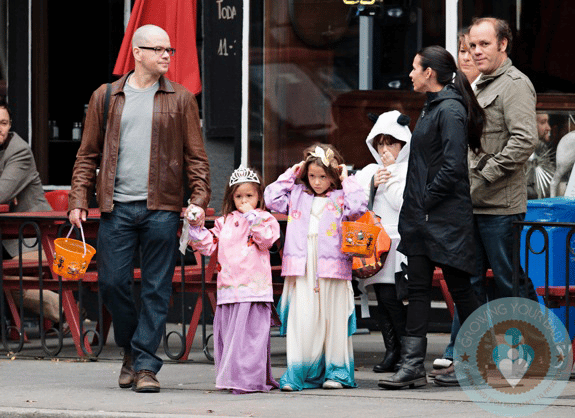 The girls stayed warm with their jackets over their princess costumes as they made their way through the city.

Matt was almost unrecognizable with his bald head, which has been shaved for his role in Elysium. He carried Gia’s treat bucket and then carried her when she got tired. 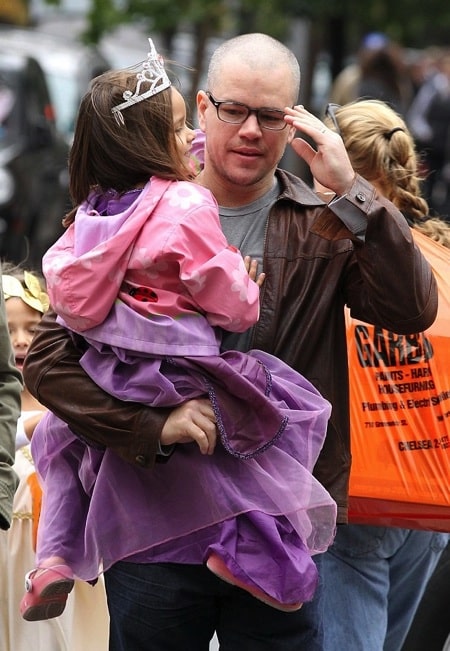 The actor recently told the UK Guardian one of the reasons he lives in New York is because,

‘without having to explain things to the girls, they can walk around the streets and just by looking around them see that the world is composed of all different people from different walks of life, different languages and different socio-economic backgrounds. They pick it up through osmosis.’

He went on to gush about Luciana and detailed how busy their family life is.

‘I can’t imagine being without her. Being a parent, as any parent knows, is a lot of work whether you are together or not. Our 13 year old is terrific, and she’s a big help, but with the other kids it’s just non stop. We like to do a lot of the family stuff together, particularly when we get them to school in the mornings. It starts at 6.30am. Once you get them off to school there’s always a sigh of relief. Then we have one hour where we can go and get a cup of coffee together.’

The couple’s oldest and youngest daughters we not along for the festivities. Maybe we’ll get to see them dressed up on Wednesday night!