Congratulations to Mira Sorvino and her husband Christopher Backus on the safe arrival of their third child – a boy! 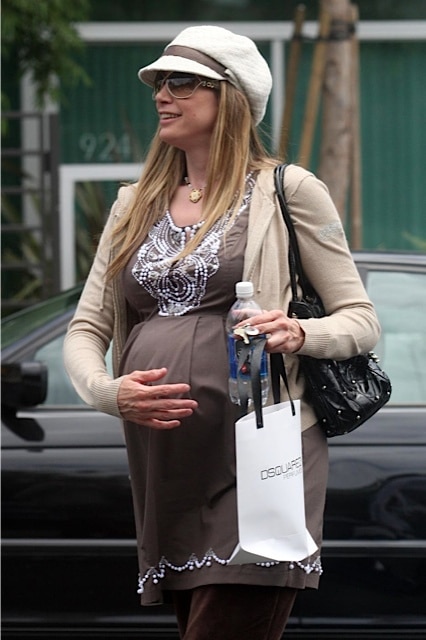 Holden Paul Terry Backus arrived on June 22 in L.A. weighing in at 8 lbs., 12 oz., following a difficult pregnancy and a long labor and delivery.

“As soon as they placed him in my arms I knew it had all been worth it,” Sorvino, 41, says. “He is my miracle baby. With everything that threatened this pregnancy and both of our lives, he came out of it completely unscathed: perfectly healthy, beautiful and wonderful!”

During her pregnancy, Mira ended up with placenta previa, which caused her to be hospitalized for weeks and then put on complete bed rest.

“I developed a blood clot (DVT) due to all the inactivity and had to be anti-coagulated for months to prevent a pulmonary embolism,” she said. “I spent another two-and-a-half weeks at the hospital, during which time, missing the children and my husband and knowing what the separation was doing to the kids became almost unbearable. Prior to this nine-week hospital stay, I had only ever spent one night away from Johnny, 3 and Mattea, 4.”

Labor and delivery also were long.

The baby was very big and he came a couple of weeks early so it took longer than we thought,” she said. “During the day we had some scary difficulties with the epidural as I achieved almost no progress with the labor and then at night the placenta created problems again. Although it was not blocking the baby’s path as it had done for almost the entire pregnancy, it started causing me a substantial loss of blood. Just as we began begging for a C-section, the situation turned around and the end of the birth was very easy.

Mattea and Johnny, meanwhile, are now adjusting well to their baby brother.

“They make up songs to sing to him! My only challenge has been convincing them not to touch him and pet him while he’s sleeping, because they wake him up!”