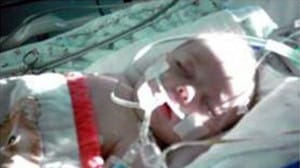 Rachel Schoger, a mother of three at the time, had been trying for two years and eight months to have a baby. During that time, she had three miscarriages. When she found out she was pregnant a fourth time, she went to her doctor. What happened next would change Rachel’s life forever.

Rachel’s doctor told her that the pregnancy was ectopic.

“I was so upset because we’d been trying for so long,” Rachel stated.

In an ectopic pregnancy, the fetus is located outside of the womb – generally in the fallopian tubes. In these circumstances, the fetus can’t survive and the mother’s life may be at risk. Because of this, ectopic pregnancies are treated as soon as they are discovered.

For Rachel, methotrexate, a chemotherapy drug often used to terminate ectopic pregnancies, was used. The drug would ensure that the fetus was killed and that her fallopian tubes and her life would be saved.

After two high doses of the medication in her fourth week of pregnancy, the treatment was over. But Rachel’s nightmare had just begun.

Just days after the last injection, Rachel started having nightmares that a baby inside of her was crying out in pain. Scared and worried, she decided to ask her doctor for a follow-up ultrasound to help put her mind at ease, but what happened next was the exact opposite of what she and her doctor expected.

Rachel was still pregnant, and the baby was in her uterus, right where it was supposed to be.

“Those fetuses that are misdiagnosed as ectopic and were actually in the uterus receive high doses of a teratogenic drug during early stage of development, and that causes malformation,” stated Dr. Yaron Finkelstein, emergency physician at Sick Kids Hospital and associate professor of pharmacology and toxicology at the University of Toronto. “This is a serious problem, and one that’s probably overlooked.”

But despite the risks, Rachel decided to carry through with her pregnancy. In January of 2006, Seraphine was born, and at first, it looked as if everything might be okay.

But nurses would find, while trying to take Seraphine’s temperature that she was born without a rectum. Further examinations would also discover that she had no vagina, no uterus and a malformed spinal cord.

Doctors were able to correct many of Seraphine’s malformations, and for the most part, she seems to be a healthy and happy five-year-old. But she will never be able to have children. And someday, she may have limitations in her walking abilities.

Rachel is certain that Seraphine’s malformations were the result of the ectopic pregnancy treatment. She has filed a lawsuit against the doctor who provided the treatment. But experts say that accurately diagnosing ectopic pregnancies is difficult, and failing to recognize an ectopic pregnancy can result in maternal death. Still, Finkelstein says there are some options.

“If the woman is stable, one option is to admit her for 24 hours or send her home and ask her to come back for another [HCG] test and ultrasound,” Finkelstein stated. He says another option is to come up with a drug that is safer for the fetus, should there be a misdiagnosis…”one that terminates ectopic pregnancies but is not teratogenic to normal, intrauterine pregnancies.”

Rachel agrees that it is difficult to diagnose ectopic pregnancies, but she feels that more emphasis should be placed on achieving a proper diagnosis.

“If you’re too early, you have a baby that needlessly loses its life. If you’re too late, the woman could rupture and die,” she stated. “They really do need to focus in on the critical window.”

Two years after the birth of her daughter, Rachel was diagnosed with another ectopic pregnancy, but that one was real. The diagnosis saved her life.

Today, Rachel works at educating women on ectopic pregnancies and potential misdiagnoses. She hopes to encourage other women to seek out a second opinion when they are diagnosed with an ectopic pregnancy, but she has yet to reach one in time. To date, she has connected with almost 200 other women that have had experiences similar to her. Many of them miscarried, some aborted and a few raised children with defects until they died from complications.