Home » Mother Pulled Over and Reprimanded for Breastfeeding While Riding Bicycle

The words “mom” and “multi-tasking” tend to be synonymous, but as a mom in Yuzhou, China recently learned, there are times that multi-tasking just isn’t a good idea.

According to witnesses, the mother was riding her bicycle while holding her 18-month-old son in her arms. The toddler then started crying and, as Gossip Hollywood Reports, rather than pull over to nurse him, the mom continued to ride her bicycle while nursing him. 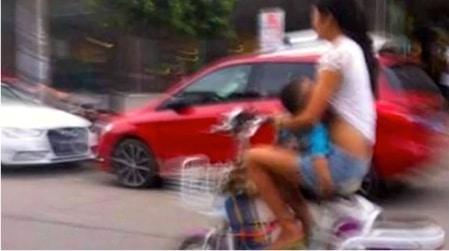 Witnesses to the incident told Orange News that the mother nursed her tot with one hand and held the handlebars with the other. All the while, the bike weaved back and forth as she tried to steer. It wasn’t long before police noticed her and pulled her over.

“She was risking her life, her son’s life and the lives of all the other road users,” a police spokesman said, according to the website. “We told her that if she carried on, we would confiscate her bike.”

Though unidentified, it’s unlikely that she’ll be trying to ride a bike while nursing after this incident….but then again, maybe not.

This mother isn’t the first to try “driving” and nursing at the same time, and she wouldn’t be the first to deny that there’s an issue with it.

In February of 2009, Genine Compton was pulled over by Kettering, Ohio officers for allegedly breastfeeding AND talking on her cell phone while driving. According to WHIO-TV, she had the baby resting in her lap whit its head propped up against the steering wheel, which adds a whole issue outside of crashing while not in a child safety seat: air bag deployment.

Compton was given a citation for child endangerment and failure to abide by child restraint laws. However, like Donkers, Compton failed to see anything wrong with what she was doing.

Just in case you were wondering, it’s not safe to drive (or bike) while nursing an infant. Children should be placed inside of size and weight approved safety restraints anytime they are in a moving vehicle. And, on a bicycle, children really should be wearing helmets to protect their heads, just in case of an accident.