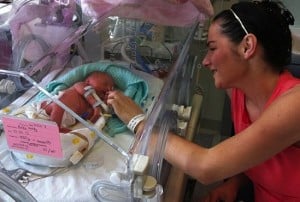 For Jane Heffey, a 28-year-old nurse at Aintree Hospital in Liverpool, “everything had been perfect.” She had a house, a career that she was happy with, a partner she loved, a nine-month-old daughter, Niamh, and another baby on the way. But unbeknownst to Jane, cervical cancer was spreading throughout of her body. Her amazing life very well may have ended in this tragic turn of events, had it not been for the daughter that this momma is crediting with saving her life – little Ciara, who hadn’t even been born yet.

Jane first became concerned that something was wrong when she suddenly started bleeding excessively during her 20th week of pregnancy. Concerned that something was wrong with her daughter or her pregnancy, Jane went for a check-up. She was then given an examination at Liverpool Women’s Hospital. It was there that she would be given a diagnosis that she never would have expected.

“I was worried that the bleeding meant something was wrong with Ciara,” Jane told Daily Mail UK. “I never imagined it would be me.”

“When the doctor was delivering the news, it felt like an out-of-body experience. It was like, everything had been perfect. I had my house, my career, my partner and my family. Then my whole world just crumbled,” Jane said. “I couldn’t understand why it was happening to me. I went running, I ate healthy, I didn’t smoke, and this happens. I found that very hard. Being pregnant with an eight month old baby, it was the worst news imaginable.”

Jane was told that she’d have to start treatment immediately to stop the cancer from spreading any further. And because side effects could cause some serious harm to growing Ciara, Jane was given the option of terminating the pregnancy. But Jane just couldn’t imagine losing the baby that had clued doctors in to the growing and spreading cancer within her body.

“Just one world could have ended Ciara’s life, but there’s no way on earth I would have done that, not when she was the one who had saved my life,” Jane said.

But that would mean signing a consent that would dismiss doctors from any liability if Ciara ended up having any adverse effects from the chemotherapy treatments, which she began while 24 weeks pregnant under the care of Dr. Karen Whitmarsh, a gynecologist at The Clatterbridge Cancer Center, Wirral.

“I signed the consent form and I was warned about the side effects, like how the chemotherapy could affect Ciara’s growth and her hearing,” Jane said. “The potential effect of the treatment on Ciara was terrifying, but this was my only option. It had to work.”

And work it did! Jane returned to the hospital the same month that she began her chemotherapy for an MRI. Already, the tumor had shrunk from 9 centimeters to 5. And the cancer in her lymph nodes had been reduced by half. Doctors felt confident enough in the level of reduction that they put off further treatment until after Ciara could be delivered.

Jane was 32 weeks pregnant when Ciara ended up being delivered via cesarean at Liverpool’s Women Hospital. And despite Jane’s concern over the effects of chemotherapy on her daughter, Ciara seemed to be perfectly healthy.

“When I woke up, Stephen told me Ciara was fine. It was the best news in the world,” Jane said. “When I saw her for the first time, she was curled up in an incubator. I just burst out crying. She was beautiful.”

Three weeks later, Jane started intensive chemotherapy that would, hopefully, remove the rest of the cancer in her body. The treatment had some adverse effects on the now mother of two, one of which was the loss of her hair. And even though she’d been warned that it would probably happen, she’d been shocked when she lost a large clump of hair.

“That really frightened me, and I realized that I needed to take control,” she said. “I called Stephen and he grabbed the clippers and that was it. We shaved my head and I toasted my new look with a glass of champagne.”

After completing several grueling weeks of chemotherapy, Jane went in for another scan. This one indicated that the cancer was completely gone. But Jane wasn’t done with treatment – she would still need another 25 external sessions of radiotherapy across her pelvis and some more chemotherapy to ensure that all of the cancerous cells had left her body. The fight was difficult, she says, but she had her family to keep her spirits up.

“At times I felt vulnerable and ugly, but the nurses in the radiation unit were great. It’s not always been easy, and there are times when Ciara, now 11 months old, and Niamh, now 22 months old, are at the dinner table and there are peas flying everywhere and both of them are crying. At times like that, me and Stephen just look at each other and we burst out laughing. After the year we’ve been through, we’re not about to moan,” she said. “I was whacked, but Stephen made me laugh every day, and he was always there for me [and] seeing my daughters’ smiles made the fight worthwhile.”

That fight has also changed her life in many ways. She’s planning on falling 10,000 feet in a charity skydive with Stephen for The Clatterbridge Cancer Center, the center that helped save her life.

“Any other time and I would be having a heart attack at the thought of doing that, but now I feel like I can do anything,” she said.

She also has a new appreciation for life, despite the fact that she has to take hormone replacement for the rest of her life.

“I’m taking HRT to replace the hormones that would have been produced by my ovaries, which were destroyed by the treatment,” she said. “It’s only now that it hits me how bad it could have been. When I see a funeral care, I have a little panic. That could have been my future.”

And it is because of that newfound appreciation for life that Jane has shifter her life’s focus from career to mommyhood.

“I used to be career orientated,” she said. “Being a mum is my priority now. Being with my kids and cherishing every moment is so important.”