Home » Neil Patrick Harris & David Burtka Play At The Park With Their Twins!

Actor Neil Patrick Harris was photographed enjoying a sunny Sunday at the park in the Big Apple with his partner David Burtka and twins Harper and Gideon. 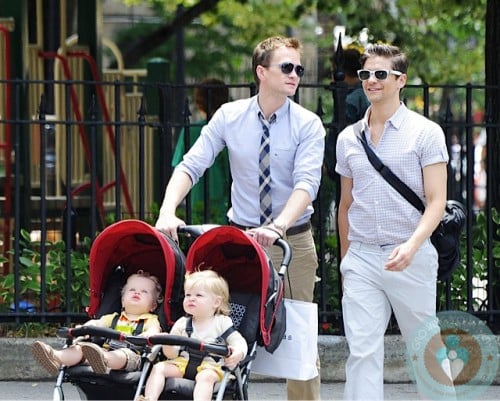 The couple, who have been together for 7 years, welcomed the twins via a surrogate in October 2010.

In an interview that airs today Neil opened up to Oprah about the struggles he had in bonding emotionally with his twins during the first months of their lives.

The twins’ conception, the pair said, was ‘very unique and weirdly scientific.’

“[The surrogate] was more like the oven. Two eggs, two embryos, one of mine, one of his,” Burtka replied, pointing at Harris.

The couple knew the surrogate, but the egg donor was anonymous. Through some incredible miracle both embryos took and the pair welcomed twins.

The excitement, however, quickly wore off when Neil started to struggle with his role as a dad.  David said he is the more “maternal” parent. Neil told Oprah he “didn’t love” the “first six, nine months” of fatherhood.

“I struggled with it a lot, like, in therapy with my own therapist,” he said. “When they’re so little and just crying, I just, I didn’t know what’s wrong and I try to soothe you and you’re still crying and I know that he’s more maternal and is much more intuitive with that, so I would pass off and then, you know, like, fix the crib, like clean the dishes. I’d do my work. I wouldn’t just vanish.”

“But I would try to provide, but I didn’t feel like I was bonding with them, which was okay, because I still feel like my strengths will come when it’s like, ‘Papa, let’s build a fort.’ I’ll be like, ‘I love forts – let’s do that,'” Harris added. “But I need to know that they want to build a fort or tell me what’s wrong or have a conversation. I think that that’s where my strengths will be more in the forefront.”

For their day out at the park the two dads divided and conquered.  David stayed with Gideon, while Neil ran around after a busy Harper. The twins were cute in matching yellow outfits, while strolling through the city.

The family is in NYC while Neil prepares to host the Tony Awards on June 10.