Yoshi is headed on an adventure that finds him exploring a sewing basket’s worth of  stages created out of yarn, buttons and various fabrics to unravel secrets and tie up enemies!   Yoshi’s Woolly World – Wii U, launching exclusively for Wii U today, features a yarn-ified Yoshi,  but don’t be fooled by the game’s cuddly appearance: While players will find it intuitive to pick up and play, finding all the game’s many collectibles and conquering its numerous challenges will challenge even veteran players. Players who want to share the fun can team up with a friend to take on the adventure together in local multiplayer for the first time in a game starring Yoshi. The game also offers creative amiibo support for the new Yarn Yoshi amiibo figures and even compatible classic figures from the Super Smash Bros. and Super Mario series.

“With a distinctive look, engaging gameplay that can be enjoyed solo or with a friend and fun amiibo support, Yoshi’s Woolly World is a must-have game for Wii U this holiday season,” said Pierre-Paul Trepanier, Nintendo of Nintendo of Canada’s General Manager and Senior Director.

“It’s rare that a game can be both forgiving for newcomers yet also pose a challenge for veteran gamers, but Yoshi’s Woolly World masterfully delivers a layered experience that everyone can enjoy.”

Each stage in Yoshi’s Woolly World – Wii U looks stunning and overflows with lovingly crafted details, challenges and hidden secrets. By tossing balls of yarn in multiple directions, Yoshi can tie up enemies, knit platforms and reveal helpful items. While making it to the end of the stage is a challenge unto itself, each level in the game is packed with fun collectibles just waiting to be found. Some might be hiding behind a wall that can only be revealed by pulling on a loose string, while locating others might involve a little creative thinking to solve an environmental puzzle. Bringing along a friend in the game’s fun co-op mode makes discovering all these secrets even more satisfying. (Additional accessories are required for multiplayer mode and are sold separately.)

For the first time in a Yoshi game, two players can play through the entire story together in local multiplayer, with each player controlling his or her own yarn Yoshi. By gobbling up their allies, players can turn the other yarn Yoshi into a ball to toss him to hard-to-reach areas. This is great when searching for collectibles and hidden areas … but also fun for people who just want to cause a little harmless mayhem. At the end of each stage, each player’s score is tallied to see who emerged victorious. It’s up to players to decide if they want to cooperate or take a more competitive approach to determining who can be the best in each stage.

The new Yarn Yoshi amiibo figures are incredibly cute, and made of real yarn in green, pink and light blue! 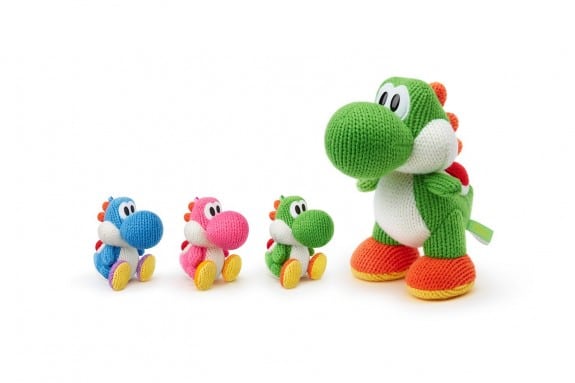 The green Yarn Yoshi amiibo can be purchased as part of a Yoshi’s Woolly World Bundle – Wii U that includes the game and amiibo at a suggested retail price of $79.99. The pink and light-blue Yarn Yoshi amiibo figures can be purchased individually at a suggested retail price of $19.99. A green Mega Yarn Yoshi amiibo will also launch in limited supplies on October 16 exclusively at Toys R’Us at a suggested retail price of $59.99. All four of these snuggly amiibo figures can be tapped into the game to activate Double Yoshi in single-player mode. Double Yoshi creates a second Yoshi character that can be used to help collect items and overcome level challenges. Yoshi’s look can also be altered by tapping one of dozens of compatible classic amiibo figures in the Super Smash Bros., Splatoon and Super Mario series of amiibo. By doing this, players can unlock patterns that cannot otherwise be unlocked in the game.