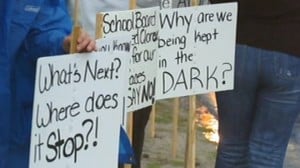 Peanut allergies and their risks are not anything new for most parents.  In fact, kids are no longer allowed to bring anything with peanuts to school in our district for fear that a child who is allergic to the nut will accidentally consume or come in contact with them unknowingly.


Some children, like a little girl from Volusia County, Florida, have such a severe allergy that it is considered a disability under the Americans with Disabilities Act.

To protect this 1st grader, her classmates are required to wash their hands before entering the classroom in the morning and after lunch, and rinse out their mouths.

These small accommodations have added up to frustration for many parents, who are in turn protesting that the little girl should be removed from the school and educated at home.

“That was one of the suggestions that kept coming forward from parents, to have her home schooled. But we’re required by federal law to provide accommodations. That’s just not even an option for us.”

Chris Burr, a father of two older students at the school whose wife has protested at the campus, made the argument that he wouldn’t ask everyone else to change their lives to fit his life, if he had a child with medical issues.

I personally believe that you can’t make that statement until you are really in that position and your child could die if just one person made a mistake.


David Bailey, the father of girl with life threatening food allergy, told MyFoxOrlando that if his daughter even smells peanuts, her reaction could be fatal.

“We’ve fought very hard to put certain things in place… to keep her alive… in school.  She’s already a cast-out. She can’t do things that most kids can do.”

“On average, it’s probably taking a good 30 minutes out of the day. That’s my child’s education. Thirty minutes could be a while subject.”

Last week she and other parents protested outside the school, picketing with signs that said, “Our Kids Have Rights Too.”

Thankfully the school is standing by the child, stating that it must protect the health of the student and I applaud them. As the mom of a special needs child, I think it’s inconsiderate of these parents to say that this little girl’s safety isn’t worth the couple minutes at the sink washing their hands and rinsing their mouths.
After all, each child should have to wash their hands before entering the classroom in the morning and after lunch so the only extra step is the mouth rinse, which would probably only takes up a couple seconds.
Related Articles: