Our ninth profile is of Bryce and Chloe. 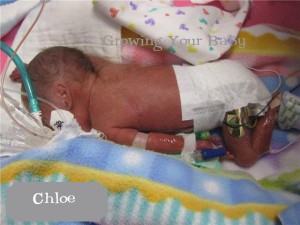 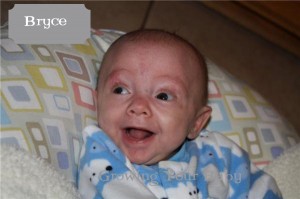 Bryce and Chloe were born on May 26th 2009 at exactly 24 weeks. Dad Jason said “yes and no” to whether or not the reason was known for the premature birth of the babies. Jason said that he went in with his wife to the OB for a regular check up at 22 weeks. Her doctor discovered that she was 2 cm dilated and 100% effaced with bulging membranes (amniotic sac). This was less than two weeks after a completely normal ultrasound appointment. Christie was taken by ambulance to the University of Minnesota Medical Center, where the maternal-fetal medicine specialists told us that she was in serious danger of preterm premature rupture of membranes (PPROM), and that the twins could be born at any time. She was put on hospital bed rest and constant monitoring from that moment on. Three days later, her membranes did rupture, but the twins held out for another 11 days before they developed complications and had to be delivered by emergency c-section.

Jason says that they still have no idea why Christie’s body effectively decided it was “time” nearly 18 weeks early. There were no signs of infection, and she didn’t have any complications or warning symptoms. Her OB-GYN speculated that since she has a rather small uterus, the size of the growing twins felt like a full-term baby to her body far too early.

At birth, Bryce weighed in at 580 grams and his sister Chloe was 555 grams. Until they were born, everyone thought that Bryce (Baby A’s) amniotic sac was ruptured, and that he was holding on for his little sister. As it turns out, it was Chloe’s sac that had ruptured, which may in part account for her slightly smaller size and subsequent complications. Both of the twins were stable after intubation in the delivery room, with Apgar scores of 4/8/9 for Bryce and 3/5/7 for Chloe.

In all but one respect, Bryce was always the stronger of the two. The day after he was born, they took him off the ventilator and he was breathing room air unassisted for close to four hours! Both twins started off on mechanical ventilators, and were then moved to high-frequency jet ventilators. They both had PDAs (patent ductus arteriosus), but Bryce’s closed with medication, while Chloe required surgery. Both twins had Grade 2 IVHs (brain bleeds), but Chloe’s was bilateral, while Bryce’s was only on one side and resolved very quickly. Bryce opened his eyes first, and was also the first to start receiving gavage feedings of Mama’s milk. When they found bacteria growing in their ventilator tubes and subsequently in their urine, Chloe’s was always more severe.

Bryce’s big challenge was low blood pressure. He was on dopamine for hypotension until he was nearly a month old; Chloe only needed the medication until she was about two weeks old.

In fact, our little princess looked like she was going to leap frog ahead of her big brother at three weeks of age, as she started gaining weight more steadily and her feedings increased faster.

Unfortunately, our daughter developed necrotizing enterocolitis (NEC) at around 3.5 weeks; tragically, a suspected bowel perforation less than a day later resulted in a massive infection and heart failure that claimed her life very abruptly on day 26, despite heroic efforts on the part of the NICU staff.

Bryce was on the ventilator for a little more than five weeks, and then on a nasal cannula for an additional nine weeks. He developed stage three aggressive posterior retinopathy of prematurity (AP-ROP), and was transferred to Children’s Hospital of Minnesota for laser surgery at 70 days of age. He recovered from the surgery well, and stayed in the hospital for another 38 days before he came home. Bryce also struggled with reflux and apnea/bradycardia spells when he started bottle/breast-feeding, and he suffers from protein-induced enterocolitis, which means that Mama is on a dairy-free/soy-free diet to this day. Bryce came home on an apnea monitor (which he is still on), but did not need oxygen or caffeine.

Bryce spent 108 days in the NICU before coming home. As for lasting effects, dad says it is a little early to say whether the issues will be mild or moderate. His growth started off slow, and he’s extremely small even for his adjusted age, but he’s been exceeding expectations for the past month. Bryce is likely hard of hearing, but he is not deaf, and part of his hearing trouble may be due to a small cleft palate which will eventually be repaired. Bryce had laser surgery for AP-ROP, and he will definitely need glasses someday, but he is not blind and we’re cautiously optimistic that he will have decent vision as he gets older. It’s too early to tell if he’ll have developmental issues, but odds are that he’ll have at least a few challenges to overcome.

Dad says that one of the hardest parts about having Bryce at home is how isolated they feel. Due to his small size and Chronic Lung Disease, which is damage to the lungs caused by the six weeks he spent on ventilators, we are constantly reminded that if Bryce gets sick, he’ll likely end up back in the hospital. This has been especially hard with all the fear surrounding this year’s cold & flu season, as dad feels like they have to keep him quarantined at home. Though he is nearly six months old, many of Bryce’s family have yet to meet him!

Bryce has his angel sister Chloe to look over him. He also has a big brother named Logan who is almost three years old. Logan was born at full term. Dad says he is a great kid and loves to help out his little brother.

If Jason had one piece of advice for a new preemie parent, it would be this: Be there for your child(ren) as much as you can. Yes, it’s scary and it’s stressful, but try to learn as much as you can about their care. The doctors and nurses at both our NICUs were fantastic, but even good people make mistakes, and you’ll notice little things about your child that the nurses might miss. Speak up if you have concerns, don’t be afraid to ask questions, and don’t back down until you’re satisfied.

I asked Jason to describe Bryce and Chloe in one word and he said this: Bryce “TENACIOUS” and Chloe “DRAMATIC”.

I have to say that I am absolutely BEYOND impressed with Jason. It is not too often that you see a dad in an online group for premature babies. This is definitely a hands on dad and it is so refreshing to see!It seems to me that Bryce and Chloe came into a wonderful family full of love and hope. I wish Bryce nothing but the best, along with his mom, dad and brother in the future.

If you would like to read more about the twins or follow the journey that lies ahead, you can go here to A TWIN STORY