Next are two brothers that were both born premature over four years apart.

Mom Amanda had PROM (rupture of the amniotic sac) for both pregnancies. With Zander she did have contractions, but not with Quinn. Amanda lasted five days on bedrest with both boys before infection set in and they had to be delivered. 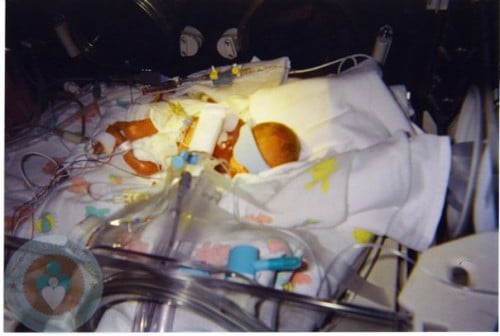 Moments after birth Zander was placed on the ventilator and also had two chest tubes inserted.

At two weeks of age he had a PDA(patent ductus arteriosus) ligation surgery to close a blood vessel that normally closes at birth for full term babies but remains open with most preemies.

Zander received multiple blood transfusions, had to have phototherapy for jaundice, was fed through a feeding tube for a few months, and was on nasal oxygen until he was three months old. 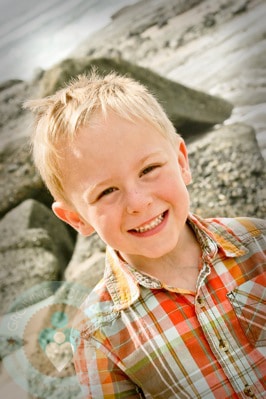 At 2.5 months old he had double hernia surgery which ended up being a very difficult recovery. He ended up back on the ventilator for a week before being weaned.

Zander was able to leave the NICU after 109 days and went home on an apnea monitor.

On September 16th 2009 Amanda found herself ready to give birth to another preemie. Quinn was born weighing 1lb 3oz at only 23 weeks and 5 days.

Quinn was on a combo of breathing devices during the first six weeks of life. He was on the regular ventilator, the oscillating vent and nitric oxide. He then was on nasal cannula with oxygen for pretty much the rest of his NICU stay.

At one week of age he had a PDA ligation surgery and then at 2.5 weeks old he had surgery because of NEC (Necrotizing enterocolitis-acute inflammatory disease occurring in the intestines). They had gone in surgically to place a drain however it did not end up working the way that it should. Doctors decided to go back in and took out the dead section of intestine a few days later. Quinn then had an ostomy bag for the next 3.5 months.

During his time in the NICU he had multiple blood transfusions, phototherapy for jaundice, lots of blood pressure issues and a feeding tube for four plus months.

Quinn was doing really well and on the road to coming home when at 3.5 months old he contracted swine flu and had to go back on the oscillating ventilator and nitric oxide. 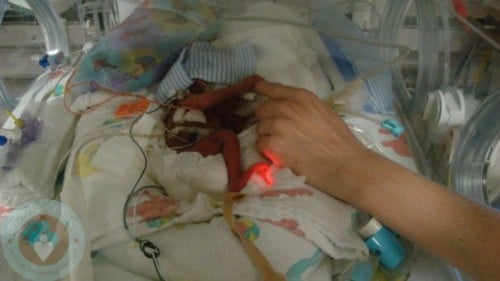 He was very, very close to death for about a week and then turned the corner and never looked back!

Once he recovered from the swine flu he had laser surgery on both eyes for ROP (retinopathy of prematurity- disease of the retina) stage 4 and 5.

Lastly he had a final intestine surgery right before he came home to take down his ostomy.

After 145 days Quinn came home with no monitors or oxygen at all!

As for lasting effects from their prematurity, Zander has years of occupational therapy, physiotherapy and speech therapy. He has recently however graduated from all of them!

Zander did develop epilepsy in 2009 and was having five seizures a day before they finally got it under control with medications. It is believed that they may be related to his early premature but there is also family history with seizures as well.

He started Junior Kindergarten this year so we will see if any learning disabilities come up now that he is school-aged. 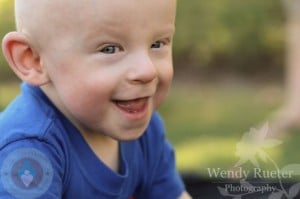 Quinn’s main issue is gaining weight since he wasn’t able to eat normally for so much of his NICU stay due to the NEC. He turned a year old at 13.5 pounds. He is on a high calorie/high protein diet to help with this, as well as to help with his osteopenia of prematurity (a decrease in the amount of calcium and phosphorus in the bone).

Quinn gets weekly occupational and physiotherapy to help meet his milestones. Considering where he started, he isn’t too far behind.

Amanda suffered four miscarriages between the boys and although she does want more children will not risk having another preemie. They will adopt in the future if both boys continue to do well.

I asked Amanda if she could give one piece of advice to a new preemie parent, what would it be? She said:

Ask for help- you are not a superman/woman and having a child in the NICU is (probably) the hardest thing you will ever go through.

I asked her to describe the boys in one word. For Zander she said: PASSIONATE and Quinn she said: SWEETNESS

Please also Visit the March of Dimes for more information on the Prematurity Awareness campaign.