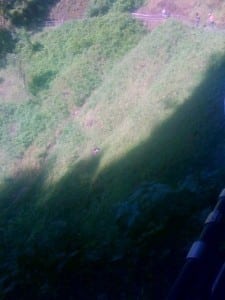 Parents will often go to any lengths to save their child – even putting their own life at risk. Such a case was seen Sunday when a Salem, Oregon father, without hesitation, jumped over a guard rail and slid down a steep hillside 70 feet to save his son.

It was little Emmanuel Vasquez’s first trip to Silver Falls State Park. He and his parents, Ana and Vallejo, were enjoying the afternoon on one of the trails. As they were heading back, Emmanuel had asked his mother for his juice. Ana sat her soda down, handed Emmanuel his juice and turned back around for just a moment.

Like most rambunctious toddlers, a moment is all it takes for something to happen. Just before she turned back to Emmanuel, Ana heard him saying, “Mommy, look, I’m sitting down.” When she next saw her son, he was sliding off the bottom rail, toppling head over heels down the steep hillside.

Ana started screaming her son’s name, hoping he would hear her and maybe find a way to grab on to something. Her screams reached the other trail visitors and her husband.

Vallejo turned to see his son falling down the steep hill and, despite his fear of heights, jumped over the railing after his son. The determined dad was able to keep his skid controlled so that he didn’t topple along with his son, all the while trying to keep an eye on his son and hoping that he could reach him before he plummeted down the waterfall just below. 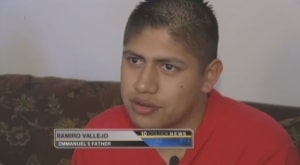 Suddenly, Emmanuel stopped. Vallejo thinks his son was finally able to grab on to something, allowing him to finally catch his son. Once Vallejo reached his son, he held him tightly. “I’m here with you, I told him,” Vallejo told reporters.

According to Vallejo, the grass on the hill was slippery. He wasn’t sure how to get his son back to the trail. Luckily, however, a family taking pictures down below helped them reach the trail. Vallejo then carried his son to a nearby bridge where the two met Ana. Emmanuel clung tightly to his mother, telling her to hug him really, really hard.

During the fall, someone made a call to 9-1-1. Fire Chief Fred Patterson responded, finding the family walking up the path. Patterson was amazed that “it was a couple of scratches and bumps and bruises.” 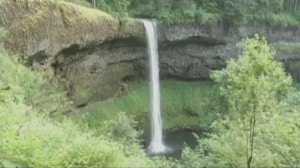 Ana and Vallejo still took Emmanuel to the hospital to check for head injuries. Remarkably, outside of the scratches on his back and above his nose, Emmanuel was fine. His father was astounded by the fact that he was able to save his son and disregard his fears. “I’m just thankful my son’s here with us today,” he said.

The double railing had just been evaluated by the Park Manager, Kevin Strandberg the week before. Strandberg stressed to the public, “If a parent, literally, doesn’t have a hold of their child, considering the topography that’s there, there are possibilities.” He finished by saying, “The best thing is, if you’re going to go hiking on the trail with kids, keep hold of them.”