Home » Sextuplet Family is Paying it Forward This Christmas 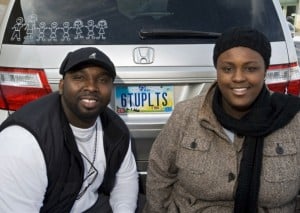 Mia and Rozonno McGhee have a lot to be thankful for this Christmas, and they know it.  Earlier this week, they spread the wealth around by making a substantial donation, of baby items, to the Ward Family YMCA donation drive for the homeless.

On June 9th the McGhee family welcomed sextuplets, Rozonno Jr, Isaac, Josiah, Elijah, Madison and Olivia.  Caring for six little ones has, obviously, meant a huge life change and challenge for Mia and Rozonno.  The couple gives credit to the outpouring of support from their community for helping them through the first few months.

“We appreciate what the community has done for us.  As (the babies) grow out of things, you better believe we’ll be giving it to the shelters,” Mia said.  “We believe in paying it forward.”

The McGhee’s donation, this year consisted of diapers, baby clothes, formula, a stroller and a cash contribution of $100 from Rozonno’s new carpet and upholstery cleaning business.  They plan to continue to make donations as their children grow.

“We want our kids growing up to give back to the community every year,” Rozonno said.  “That’s going to be part of our tradition, because the community gave so much to us.”

When the sextuplets were born, their combined weight didn’t even hit 10 pounds.  They are now between 11 and 13 pounds each and are developing beyond expectation.

The kids are teething and starting to crawl.  As for their parents, Mia says she can now change six diapers in 10 minutes.  That must be a record…somebody should look into that.

Over the past few months, the McGhees have received support and donations to help them supply their children with gallons of formula, thousands of diapers and have had help raising funds to acquire a minivan and upgrade from a two bedroom house to a four bedroom house in another community.

Much of this help has come from Ira Sharfin, CEO of Continental Office Environments, as well as J.C. Penney Co., Abbott Labs and IMPACT Community Action Agency, among others.

Mia said, “With the economy and everything, we didn’t expect the outpouring we’ve received.”

The McGhees may have some television experience in their future but for now, they are focusing on their priorities; establishing their burgeoning business and tracking down a stroller that can handle six children.  Donations to the children can be made through a trust fund at JPMorgan Chase. – Jen R, Staff Writer.