Home » Sick and Pregnant, But Not Always In The Morning 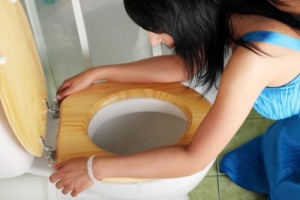 So, I’m 14 weeks pregnant and I did something on the way to work the other day that I haven’t done since my college days…

I threw up on someone’s front lawn!!!

My tummy has been a living, breathing Pepto Bismol commercial lately (nausea, heartburn, indigestion, upset stomach . . . you get the point).

I woke up that Tuesday, morning and I felt great! I felt well rested, I brushed my teeth without gagging (which is a feat in itself), and I even managed to eat some toast. I headed out on the road to work, amazed at how well I felt. I made it about 7 minutes down the road when I started gagging uncontrollably. That is not unusual these days, so I thought it would pass. However, it quickly became apparent that this was no false alarm.

I frantically started looking around for a garbage can or a somewhat private place to go but quickly discovered I had no choice but to release the contents of my stomach onto some unsuspecting homeowner’s front lawn.

At that exact moment in time I realized at that I had to investigate what options I had for stopping, or at the very least, controlling this new feature of my pregnancy.

I’ve discovered that there a few things that seem to set my sickness off, including:

Treatments for morning sickness typically aim to reduce the symptoms of nausea, and at this point I’m willing to try anything.

Some tricks that currently work for me are:

Additionally, one of my girlfriend’s recommended Preggie Pops to me. These candies are naturally flavored and designed for pregnant women who are in the same boat as me. I don’t know what makes them work but the sour flavors ease my nausea! On top of the other 10 remedies I follow daily, I now keep a handful of these candies in my desk, purse and on the counter at home.