The two children who acted in Slumdog Millionaire caused some excitement when they arrived in LA this week to be part of the Oscars ceremony tonight. 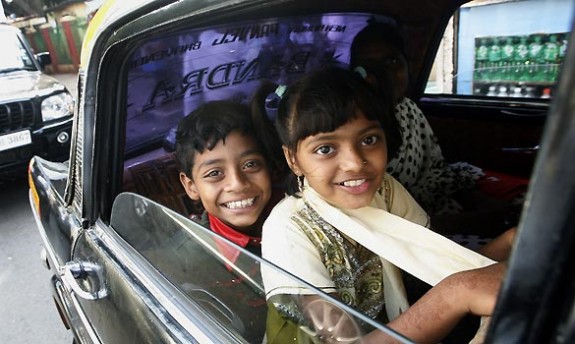 Azharuddin Mohammed, 10, and Rubina Ali, 9, who played the young versions of the lead characters, have never flown or left India before. “Not in my dreams did I ever think that I will go to America,” said Rubina, who lives in a one-room hut in a Mumbai shantytown. “I have to buy clothes and shoes for the award ceremony. I’m going to go and take a lot of pictures and show them to people.”
Their trip mirrors Slumdog’s rags-to-riches storyline about a boy from a Mumbai slum who wins the Indian version of Who Wants to be a Millionaire? It is also certain to fuel the controversy already surrounding the film when the children are paraded along the red carpet tomorrow night — and then flown back to the Mumbai slums.

James Finn, of Fox Searchlight Pictures, said that the studio had made last-minute visa and travel arrangements for the children, who would be put up in a five-star hotel during their visit to Los Angeles. My question is: How fair is it to bring these children to sparkly Los Angeles, put them up in luxurious accommodations, feed them the best food and then send them back to the ‘slums?’

The children’s parents are said to have rejected the studio’s offer for them to attend the Oscars at first, asking it to give them the money for the airfare instead so that they could spend it on something more useful.

An economy-class return flight from Mumbai to Los Angeles costs about 50,000 rupees ($1500) — a small fortune in a country where 76 per cent of workers earn less than $2 a day.

Azharuddin’s father usually earns 50-100 rupees a day selling scrap wood, but has been in hospital recently with tuberculosis. Rubina’s father has also been unable to work since breaking his leg.

Azharuddin’s family were recently evicted from their hut and they now live under a tarpaulin on the edge of a slum.

“He’s supposed to be the hero in the movie, but look how he’s living,” his mother, Shameem Ismail, said.

The parents accepted the studio’s offer only after it agreed to pay for Rubina’s uncle and Azharuddin’s mother to accompany the children.

Boyle and Christian Colson, the producer, are paying the families a monthly stipend and have set up trust funds for the children. But things have not gone smoothly.

The children have been unable to attend school because they have attracted crowds of journalists. And when Colson sent money to Azharuddin’s father to buy a new home, he gave it to a builder who disappeared.