As autism testing becomes more and more advanced, and we become more aware of the symptoms, diagnosis – or at the very least, tentative diagnosis – becomes more possible in the world of autism. So much so that researchers are now looking at the earliest interventions possible to determine if and how they may affect children likely to be diagnosed with autism. In fact, one recent study suggests that interventions starting at six months of age may very well eliminate symptoms and developmental delays in children that may have been diagnosed with autism. 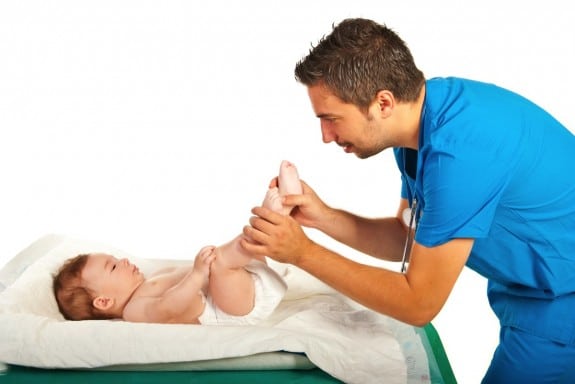 “Autism treatment in the first year of life: A pilot study of Infant Start, a parent-implemented intervention for symptomatic infants,” was co-authored by UC Davis professors of Psychiatry and Behavioral Sciences Sally J. Rogers and Sally Ozonoff and published online in the Journal of Autism and Developmental Disorders.

The Infant Start treatment program was administered over a six month period to 6- to 15-month-old infants that had exhibited marked autism symptoms, such as decreased eye contact, social interest or engagement, repetitive movement patterns, and a lack of intentional communication. And it was administered by the people who were most in-tune and spent the greatest amount of time with the babies – their parents.

“Most of the children in the study, six out of seven, caught up in all of their learning skills and their language by the time they were 2 to 3,” Rogers, the lead author on the study and developer in the Infant Start therapy, told Science Daily. “Most children with ASD are barely even getting diagnosed by then.”

Rogers is quite right.

Although autism symptoms can and do present before a child’s first birthday, children diagnosed with autism rarely receive early intervention before their third birthday. This is six to eight times later than the children who participated in the study. And since infancy is the time when children first learn social interaction and communication skills, the extremely early intervention could have a lot to do with the overall success of the study.

“Most of the children in the study, six out of seven, caught up in all of their learning skills and their language by the time they were 2 to 3. Most children with ASD are barely even getting diagnosed by then,” Rogers said. “For the children who are achieving typical development rates, we are essentially ameliorating their developmental delays. We have speeded up their developmental rates and profiles, not for every child in our sample, but for six of the seven.”

And the researchers feel this should now be the model and treatment that doctors use to help ensure that children have the very best start in life.

“We are very fortunate to have this treatment available for the affected infants identified through our study,” Ozonoff, who directs the MIND Institute’s Infant Sibling Study, an early detection project that follows babies at risk for autism or ADHD from birth through age 3. “We want to make referrals for early intervention as soon as there are signs that a baby might be developing autism. In most parts of the country and world, services that address autism-specific developmental skills are just not available for infants this young.”

Of course, parents were also a crucial piece to the puzzle; it is parents that interact with their children daily, and that have the most potential when it comes to encouraging positive social interaction with their children. And they can do it as the parents in the study did – through natural play and daily routines that concentrate on interactions and supporting the individualized developmental needs and interests of their children.

But it’s important to understand that the researchers aren’t trying to eradicate autism. Instead, they are trying to help children with ASD better adjust to the world around them while still retaining their special gifts that so often affect the general population in a positive manner.

“I am not trying to change the strengths that people with ASD bring to this world,” Rogers said. “People with ASD contribute greatly to our culture. The diversity of human nature is what makes us a powerful and strong species. We are trying to reduce the disability associated with ASD. My goal is for children and adults with autism symptoms to be able to participate successfully in everyday life and in all aspects of the community in which they want to participate: to have satisfying work, recreation, and relationships, education that meets their needs and goals, a circle of people they love, and to be generally happy with their lives.”