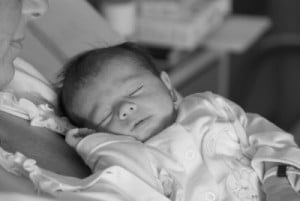 When we think of bacteria, we often think of germs that we want to avoid, but not all bacteria are bad. In fact, some are essential for good health; such is the case of bacteria found in the gut and intestines. A new study has found that, for babies, gut bacteria (microbiota) diversity is determined by the choices that mom makes. And it all starts at birth.

Using new culture-independent DNA sequencing, the study analyzed the gut bacteria of 24 healthy, at term infants from the population-based Canadian Healthy Infant Longitudinal Development (CHILD) birth cohort through stool samples. Six of those infants had been born via C-section and 10 were exclusively breastfed at the age of sample collection (4 months).

After analyzing the samples, researchers found two dominant bacteria among the entire cohort: Actinobacteria (median 36%, mainly Bifidobacterium) and Firmicutes (median 44%, with a wide diversity in genus).

Phylum Bacteroidetes showed up in fewer infants overall (38%), but the bacteria didn’t show up at all in infants that had been born via C-section. And infants born via C-section had significantly fewer bacteria of the Escherichia-Shigella family. But what’s even more interesting is that elective C-section seemed to have the most impact on gut bacteria diversity; those born via C-section electively were said to have “particularly low bacterial richness diversity.”

According to Rob Knight, PhD, of the University of Colorado in Boulder and his colleagues, the difference in gut bacteria among babies delivered by cesarean is due to the fact that passage through the birth canal is associated with a bacteria transfer from mom to baby. This was shared in a commentary that accompanied the University of Alberta in Edmonton study.

Researchers also found that breastfed infants had a higher diversity in gut bacteria when compared with formula-fed infants. The following list of differences was provided by MedPage Today

“These correlations were positive in some cases and negative in others, illustrating the complexity of this microbial ecosystem and reflecting possible symbiosis or competition between species,” Anita L. Kozyrskyj, PhD, of the University of Alberta in Edmonton and team reported online in CMAJ.

So why the differences? Kozyrskyj’s team explains.

“Breast milk, rich in proteins, selects for persistence of beneficial bacteria and limits colonization of harmful ones. The strong selective pressure of breast milk is demonstrated by the lower diversity of microbes in the gut of breastfed infants than in the gut of formula-fed infants,” the team wrote, adding that “these changes in the developing microbiome could explain susceptibilities to a variety of conditions later in life” such as diabetes, obesity and other GI-related conditions. However, researchers pointed out that there is more that needs to be done to give any real definitive answers on how gut diversity may affect the infants later on in life. Additionally, the team was unable to analyze diet-by-mode of delivery subgroups or the effect of antibiotic treatment on the infants because the subgroups were just too small. They feel these variables should also be analyzed in future studies.

“Further research is warranted to determine whether these differences are related to feeding, antibiotics, or perhaps ‘partial’ microbial exposure during emergency cesarean delivery following membrane rupture,” the team said.

It is the team’s hope that more can be done with the CHILD study; eventually it is expected to provide longitudinal sampling from more than 2,000 infants, which would give the team access to more variables that need to be considered.