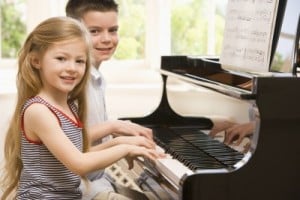 Does the road to higher learning begin at the keys of a piano?  A recent poll suggests a link between musical training, in childhood, and the likelihood of a person going on to post-secondary education.

The poll, conducted by Leger Marketing and sponsored by XM Canada, surveyed 1,549 Canadian adults through an online questionnaire.  The survey found that 69 percent of adults, who had learned to play a musical instrument as a child, had gone on to college or university, compared to 59 percent of adults, who had not received early musical training.

According to the poll, Canadian children are most likely to play the piano, to the tune of 31 percent, followed by the flute, at 18 percent and the guitar at 15 percent.

While the instrument playing group felt that their musical training had been important, listing among the benefits greater mental focus and enhanced creativity, most people did not stick with their instrument into adulthood.  Only one in six child musicians continue to play an instrument on a weekly basis, as adults.

Caroline Palmer, a psychology professor at McGill University in Montreal, believes the benefits of early musical education may be overstated.  Palmer said that children who learn to play an instrument may see, “small but significant long-term effects…on the development of spatial and fine motor skills in other domains.”

But, Palmer theorises that the transition from musical education to post-secondary education may have its roots in socioeconomic factors.  She points out that, families that are able to afford musical instruments are also more likely to have the resources to help their children bankroll an education.

The fact is, the benefits of musical education may exist, but they are difficult to prove, imperially.  Ellen Winner, a psychology professor at Boston College, has found little scientific evidence to support claims that learning an instrument improves the likelihood of success in other arenas.

Winner noted that there is some research that shows formal musical training seems to correlate with increased IQ levels, but it is unknown whether or not self-taught musicians, who don’t read music, enjoy the same IQ bump.

“There may well be benefits (to learning a musical instrument).  It’s just that it’s hard to prove it.”  Winner said.

Whether the benefits are proven or not, if a parent has the means to provide their child with a musical education, it can’t hurt.  Besides being fun, learning to play an instrument teaches discipline and gives a sense of accomplishment, 2 things that help prepare kids for the future!– Jen R, Staff Writer