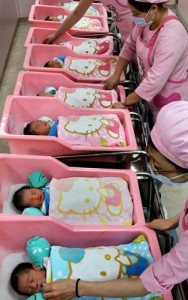 In an attempt to raise their country’s population, the Taiwanese government is offering bonuses to families who will have more children. Officials have said that in order to increase the country’s population and prevent further shrinking every women in Taiwan would need to give birth to a least 2.1 children.

Starting next year citizens who will have 3 children with at least one child under the age of two will get a subsidized babysitting bonus of three thousand Taiwan dollars (ninety four dollars) per month.

The government is also willing to instate a program that is designed to financially help low income families. The program, which will start in 2012, will give low income families 5000 Taiwan dollars a month for each child they have that is under the age of two.

Officials hope that by initiating these incentives it will increase the country’s dwindling birth rate and increase it from 1.03 in 2009 to 1.3.

2010 is the year of the tiger according to the Chinese zodiac. Government officials believe that this is the reason for the lower birth rate. Many parents try to avoid having children under fierce zodiac signs.

“Taiwan’s birth rates are expected to fall further this year because it’s the year of the tiger, so we hope the incentives will encourage couples to have more babies”.