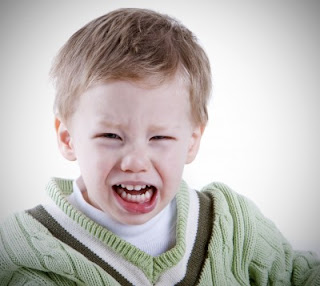 Mr. 3-year-old has been testing the limits around here recently by throwing some pretty spectacular temper tantrums.

Because he was our first child, my husband and I have no idea what to do. We have done ‘timeouts’, ignored the screaming outbursts and taken toys/privileges away. But nothing has worked so I decided to turn to the experts:

Here is what they say:

Tantrums usually happen when your child is seeking attention or is tired, hungry, or uncomfortable. They are often the result of kids’ frustration with the world — they can’t get something (for example, an object or a parent) to do what they want.

Tantrums are common during the terrible two’s, a time when your child is learning to speak. Toddlers generally understand more than they can express. Imagine not being able to communicate your needs to someone — a frustrating experience that may precipitate a tantrum. As language skills improve, tantrums tend to decrease.

Another task toddlers are faced with is an increasing need for more freedom. Your little one may want a sense of independence and control over the environment — more than they may be capable of handling. This creates the perfect condition for power struggles as a child thinks “I can do it myself” or “I want it, give it to me.” When kids discover that they can’t do it and can’t have everything they want, the stage is set for a tantrum.

How to avoid them:

What To Do When The Storm Hits:

Stay Calm – Kids can sense when parents are becoming frustrated. This can just make their frustration worse, and you may have a more exaggerated tantrum on your hands. Instead, take deep breaths and try to think clearly.

No Spanking – physical tactics send the message that using force and physical punishment is OK. Instead, have enough self-control for both of you.

Ignore them – Ignoring the outburst is one way to handle it — if the tantrum poses no threat to your child or others. Continue your activities, paying no attention to your child but remaining within sight. Don’t leave your little one alone, though, otherwise he or she may feel abandoned on top of all of the other uncontrollable emotions.

If your child has trouble stopping their tantrum it might help to say to say, “I’ll help you settle down now.”

However, if is not recommended to reward your child after a tantrum by giving in. This will only prove to your little one that the tantrum was effective. Instead, verbally praise a child for regaining control.

Afterwards, a hug and reassurance that your child is loved may help will help to re-build.