When Amna Khan was born, doctors noticed she had an enlarged abdomen. Shortly after birth, nurses reported that she was vomiting and had loose stools. Doctors at Azad Jammu and Kashmir treated her unknown condition conservatively, but when they realized that the little girl was still ill, they referred her to the children’s hospital, Pakistan Institute of Medical Services. 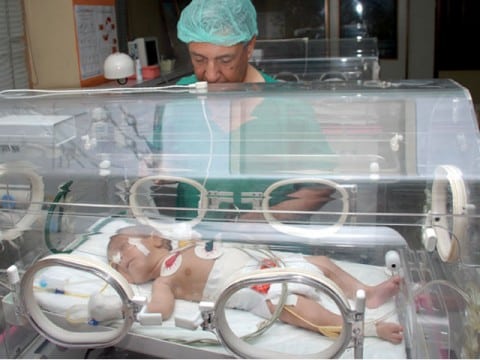 After receiving an ultrasonogram, X-rays and blood tests, doctors determined that Amna had an abdominal tumor. Pediatric surgeons at the facility proceeded with removing the tumor, but upon its extraction, they found that it had hair, four limbs, a head, a trunk and an amniotic feeding sac. In essence, it was a fully developed three-month-gestational fetus. This fetus had been Amna’s twin sibling.

“The case is rare, and it’s called ‘foetus in fetu’ in medical terminology,” said Dr. Zaheer Abbassi, the surgeon who headed up the team of doctors that removed the fetus. “In a similar case, I had removed twin foetus from a baby five years ago.”

The surgery, which took about three hours to complete, was deemed to be successful. Doctors were able to fully remove the fetus from Amna’s spleen, intestines and kidney. She has been moved to ICU, and her condition is said to be stable. Amna’s parents have been counseled in detail on their daughter’s condition.  They said that they are grateful for the doctors who worked both quickly and diligently on their daughter, and they are pleased that the operation was a success.

Amna’s mother has a history of thyroid disease and she has previously had six spontaneous abortions. These prior medical conditions may or may not be relevant to the undeveloped fetus found within Amna’s abdomen.