Home » Would You Give Up A Child That You Adopted?

A mom has come forward to tell her story of giving up the son that she adopted because of “attachment issues.”

“The first time I considered giving up D. I was lying alone in my oversized bed. It was about midnight, my children were asleep and my husband was deployed. I was so taken aback by my thoughts that I bolted upright, ran to the bathroom and splashed cold water on my face. It was dark, but I could see my silhouette in the mirror and I stared to see if I was looking at a demon instead of D.’s mother. “

I ran to D.’s room, afraid that he was already gone. But he was there, lying on his Thomas the Train sheets, sucking his thumb and breathing evenly. I caressed his cheek with two fingers and he exhaled.

“I love you little man,” I whispered, and kissed his forehead, swallowing down the knot in my throat. I went back to my room and sobbed into my pillow.”

D. was the adopted son. He had come to join the family months before this “frightening” night. He came into a family that had five biological girls. 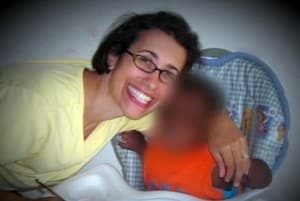 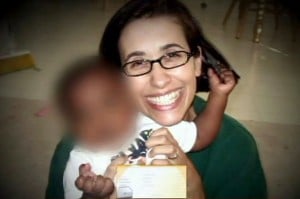 D. was found on the side of a road so doctors were unsure of his age, however guessed that he was just under a year old. When he was taken to his pediatrician there were some expected medical issues and developmental delay.

D. also suffered from coprophagia which is eating ones own feces. However their pediatrician said that most children grow out of this by age 4.

Mom says that the physical and developmental issues were not the problem. D just didn’t seem to be attaching to them as a family and especially to her as “mom”.

“His social worker, his pediatrician and his neurologist all told me that he had come a long way, and that attachment issues were to be expected with adoption. But D.’s attachment problems were only half the story. I also knew that I had issues bonding with him. I was attentive, and I provided D. with a good home, but I wasn’t connecting with him on the visceral level I experienced with my biological daughters. And while it was easy, and reassuring, to talk to all these experts about D.’s issues, it was terrifying to look at my own. I had never once considered the possibility that I’d view an adopted child differently than my biological children. The realization that I didn’t feel for D. the same way I felt for my own flesh and blood shook the foundations of who I thought I was.”

They went through some attachment therapy but she still struggled.

“My thoughts and emotions were disjointed and came in waves. One moment I was determined to keep D. because I loved him. An instant later, I realized that I wasn’t the parent I know I could be, and that I should place D. with a better family, with a better mother.”

The social worker she dealt with called one day and said that she found a wonderful family for D. They had learned of his situation, saw pictures and fell in love. Over a period of several days D got to know his new mom and then when they felt ready, he left with her.

“In our last moments together, I stared into his eyes and told him that I loved him and that I had tried to do my best. His new mom would love him so, so much; my little man would be OK.”

This is really sad. I wonder if perhaps his delays have anything to do with his attachment issues? I don’t know if I could do what this mom did. You spend so much time/effort and money on adoption only to have nothing in the end. I hope this little boy is happy in his new home and getting the attention and love that he deserves. – Shannon, Staff Writer