The parents of one of Britain’s youngest heart transplant survivors spoke yesterday of their gratitude to a German family who donated their dead baby’s heart. 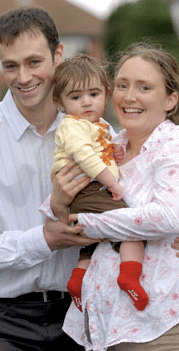 Andrew McAskie, now 11 months old, had a heart attack at birth and was close to death when a family whose one-year-old baby had died made their offer. The heart was flown from Germany to the Freeman Hospital in Newcastle upon Tyne and, five weeks after he was born, Andrew underwent a transplant.

The Freeman Hospital performed Britain’s first successful baby heart transplant more than 20 years ago on Kaylee Davidson, who was 5 months old. She is now a healthy young woman. Since then nine babies younger than Andrew have had heart transplants in Britain, including one in 1989 who was 5 days old. Of those still alive, Andrew is the second-youngest.