Home » A New Speed Bump is Giving B.C. Drivers Something to Slow Down About 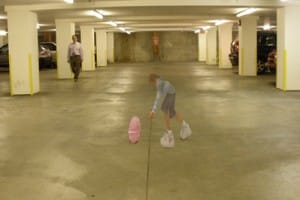 Could an optical illusion slow drivers down?  The BCAA Traffic Safety Foundation hopes Pavement Patty will do just that.

Pavement Patty is a fancy new speed bump that has been installed near West Vancouver’s École Pauline Johnson Elementary School.  The speed bump is painted with a trompe-l’oeil effect that makes it appear, to drivers, as though a young child is rising out of the pavement of the road and, ‘Look out!  You’re going to hit her!”

The illusion has been designed to look her most frightening at about 100 feet and then return to her regular speed bump posture.  If a driver is traveling at 30 km per hour, as they should be, they will have enough time to process the child-like illusion before colliding with her.

David Dunne of the BCAA Traffic Safety Foundation had this reply for the naysayers, “It’s a static image.  If a driver can’t respond to this appropriately, that person shouldn’t be driving…”

None-the-less, police will be on scene this week, monitoring driver reaction to the new traffic calming measure.

The speed bump is part of a $15,000 safety initiative spearheaded by the BCAA Traffic Safety Foundation and Peventable.ca.  It is hoped that it will raise awareness and lower incidences of driver caused pedestrian injuries and fatalities.

But pedestrians aren’t off the hook.  Dunne says that, “Pedestrians need an attitude shift too.  They have to realize that just because they are in a crosswalk doesn’t mean they are safe.  In fact, most get hit while using crosswalks.”

Traffic calming measures like Pavement Patty have already been tested in Europe and the United States.  In 2008 the city of Philadelphia used the image of three spikes, on its speed bumps, during the ‘Drive CarePhilly’ campaign. – Jen R., Staff Writer