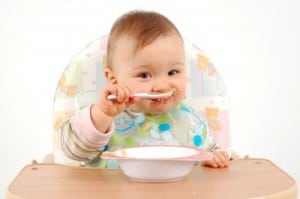 As mothers, we often adore the baby rolls in larger babies. According to The Institute of Medicine, however, the extra weight that infants carry may create health problems later in life.

Leann Birch the Professor of Human Development and Director in the Center for Childhood Obesity Research at Pennsylvania State University says,

“Contrary to the common perception that chubby babies are healthy babies and will naturally outgrow their baby fat, excess weight tends to persist. This is a national concern because weight-related conditions such as diabetes and high blood pressure.…are now occurring at rising rates among teens and young adults.”

Pediatricians and physicians are now talking to parents early on about their child’s weight, particularly when the child is already overweight or has other risk factors, like overweight parents or rapid weight gain between visits. They are attempting to help educate parents about the potential health conditions that come with being overweight.

This is just the first step in helping to reduce the number of young people that are diagnosed with diabetes. A full plan of action must be implemented. The majority of this plan must be implemented at home and it should include three elements: healthy eating habits, adequate amounts of sleep, and encouraging physical activity.

The first source of nutrition for a child starts with one basic decision – breastfeed or bottlefeed. Research has indicated that children who breastfeed are less likely to have a higher than average BMI. Yet, support and encouragement is still lacking in the United States. Without adequate support, education and encouragement, women are less likely start breastfeeding or stop too early.

Healthy eating habits should start as soon as the child is able to eat solid foods. It has been proven that a child’s food preferences can start as early as infancy. Foods low in nutrients and energy-dense should be reduced. A child’s diet should be dense in fruits, vegetables, and whole grains.

Sleep is also a vital part of your child’s health. While life can be hectic, making a schedule difficult, you may want to carefully weigh the idea of going out for a late night shopping trip with your child. You can talk to your pediatrician to find out how much your child should be sleeping for their current age and developmental stage.